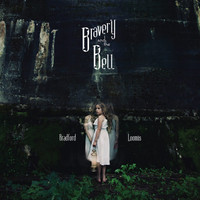 Northwestern native Bradford Loomis’ third album, Bravery & the Bell, is wrenched from difficult circumstances. The recent knowledge of his father’s diagnosis with Early Onset Alzheimer’s spurred Loomis to reflections about what past generations bestow upon us and our responsibilities to such inheritances. This is not a love letter in musical form directed at an ailing parent. This is a meaningful and fully realized exploration of serious themes in much the same way a work of literary fiction might cover the same ground. Loomis’ language is full of sharp turns of phrase, but it is never empty of meaning and aims for communication above leaving mouths agape with indecipherable or personal imagery. The seven songs on Bravery & the Bell, likewise, are full of accessible musical arrangements that help make such heavy themes go over a little more pleasantly.

The first song “Wind & Woe” has a readily accessible sound, roots rock all the way, married to Loomis’ appealingly weathered vocal. The chugging acoustic guitar running like a spine through the song is ably joined by colorful Hammond organ flourishes. The second song on Bravery & the Bell, “Chasing Ghosts”, has a deliberative and haunted air, but the sound carries even more gravitas than the opener while demonstrating the same light touch. Loomis manages to rugged up his voice even more here without ever sacrificing the capacity to create pathos through his emotive tenor. “In the Time of the Great Remembrance” has a lovely acoustic posture only mildly embellished by additional instruments. There’s much of the same authoritative air in Loomis’ voice on this track that we hear on the first two songs, but he’s joined at a few key points by backing vocals that lighten his presence. The approach shifts during the song’s final half when the tempo quickens and Loomis structures the vocals in a different way.

“The Swinging Bell” continues illustrating Loomis’ obvious singer/songwriter influences, but he certainly brings an individual quality to even the most familiar elements. This is a fast paced acoustic based tune and Loomis’ smoky baritone is balanced out by some more tastefully sweet backing vocals. One of the release’s most reflective moments, “Though the Days Are Fleeting”, has a delicately wrought mood that goes more in the direction of introspection rather than despair. The guitar work plays to the song’s strengths rather than indulging itself with moments of needless extemporization. It’s easily one of the most poetic songs on Bravery & the Bell and depends on just the right touch to succeed. “Across the Divide” concludes the album and is the first single as well. It’s the only track on the release not produced by Brandon Bee and has a more commercial edge than many of the other performances on Bravery & the Bell without ever surrendering its emotional credibility. That’s the biggest part of the story on Bradford Loomis’ latest release. He’s found a way to explore the personal on the biggest possible stage and cloaks these weighty subjects in an accessible musical persona that will connect with many listeners.