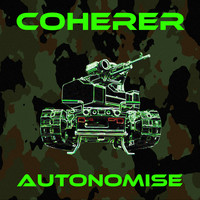 EDM or electronic dance music, is known to many as one of the most popular genres of the music scene. Why is that, what types of music is it precisely? Well electronic based music is music infusing various sounds into a blend of melody of certain music. Like take a DJ mixing together two different songs together, that is sort of the same effect with electronic music. In the case of Coherer or Steve Netting whose from Swindon, England across the pond from the U.S. of A. His style is of course electronic music, except he says his choice of genre is classic electro.

But before taking himself as Steve Netting and going forth with Coherer he was involved in another electro project called Cybernet 1202 with Sean Higgings from Cybereign. Aside from that project, Coherer is an electro artist, having an early love of electro music dating back to an artist named Paul Hardcastle with his track “19” in which Coherer had heard back on the radio at the age of 7 back in 1980 something well no it was 1985 to be exact. Not only that though he works within the IT community having an interest for classic computers and electronics of all shapes and sizes, hence why he is doing what he is. Which has brought on an inspiration for his music in the form of this newest track called “Autonomise”.

“Autonomise”, ends up being as electronic as it can get. It uses that aspect with its melodies and weird tones of sound waves, to create a style that is truly out there. It’s like take those fast paced tracks heard in TV shows or movies, taking place at numerous clubs, that is what it is for “Autonomise”. You get that aspect with this track, which ends up being nice and rather decent sounding. But electronic music in general is not always for everyone. Now some artists and other bands within the music scene may use this as their own source wave of music, like Blood On The Dance Floor, Hatsune Miku, and Skrillex or even Daft Punk or deadmau5. If you know of these acts, then you can get a glimpse into what Coherer is wanting to do and is doing with his own variation of the genre.

The music portion of this track, is done right and sounds upbeat and catchy but that is all it does really. This song ends up being one you will rather enjoy or not enjoy as much as you would have liked too. It’s a hit or miss if you will. It sounds nice, has a melody and tone of beat going for it, but that is all there is for it. Coherer as an artist using the electronic music as his guidance is what he has picked and while it is working fine and dandy now. It could easily continue to work out for him, or it could not work at all much longer. In the case of “Autonomise”, it works out well, you just have to see where it will lead him too next is all.