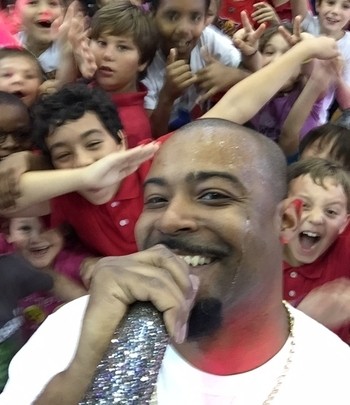 Music has always made itself known in its form, no matter the shape or size in question. But in question is how can music interact with bullying, combating such a thing? Well bullying has been around for the longest time, but in recent times, bullying has been seen more so than ever before. So of course “anti-bullying” organizations, events, programs, and projects of all kinds were launched. This would end up having one simply called “The Anti-Bullying Launch Party”, partnering up with Life Sports Fitness and PMD Ministries, to combat against bullying within the Fort Lauderdale, Florida terrain.

The person behind the project is Ramon Robinson, when asked about what this whole project was about he had said “I’ve partnered with Life Sports Fitness and PMD Ministries to begin combating bullying in the Fort Lauderdale area through music and literacy. We have developed an anti-bullying comic book based of one of my songs entitled “Keep Dreaming”. We have begun holding events where I perform for the children and also hold a Q & A session with adults and children to begin discussing bullying. We have been handing out our anti-bullying comics at these events.”

He went on to say what he would like to achieve by doing all of this as follows, “Well we’re hoping to begin bringing our community together through sending out positive messaging. After this past election we’ve seen a lot of division and we’re just trying to change that. I would love to see more of a community effort and more people helping one another.”

This said, the project has already done so much as it were, and it will continue to help all, not just in Florida but everywhere else as well, with their online videos, of footage from their events.

But what can the people know about this project and how can they help, in any way they possibly can. Well Ramon says “Most of all I would like people to know it’s up to us to create change. We can’t depend on politicians to begin creating the change we would like to see in our communities. Helping is easy. All we need at this point is people that are willing to help spread a positive message. We’re using some the proceeds from the streams of our music to help create events so streaming songs like “Keep Dreaming” by Absoloot is a great way to help.”

Having launched this at the start of this year, back in January 28, 2017, out at the New Mount Olive Baptist Church in Sunrise Florida, where they had held their first anti-bullying forum and Ramon being a musician of sorts, had performed to those in attendance. Even having Pastor Marcus Davidson, play moderator, as well as Super Intendent Robert Runcie being there, all was there for the same reasoning to help those in a bullying situation, and to stop bullying altogether. All there knew what they knew was right, and what they wanted from it, and by gathering together, they will prevent this from happening for the current generation to the many more to come.

Speaking of generations, Ramon expressed his feelings towards the past and present of bullying, with this to say, “Honestly I don’t like to compare times frames as to how bad things were, because it always depends on the person. From what history shows us for minorities things were definitely worse in the 50’s & 60’s. I haven’t had to deal with a fraction of what my parents and grandparents went through. I’ve honestly been doing my best to create change where I see necessary any time I can.”

We can all agree on that remark, alone, preventing bullying from here on out.