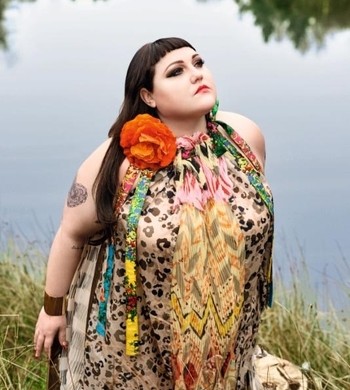 After 17 years of kicking out increasingly dancy garage-punk with the Gossip, Beth Ditto will make her solo debut with Fake Sugar, set for release on June 16 via Virgin Records. “Fire,” the album’s leadoff track and first single, premiered today as BBC Radio 1’s “Hottest Record in the World.”

Ditto – who will play sold-out shows in Berlin, Paris and London in April – enlisted Jennifer Decilveo (Andra Day, Ryn Weaver)as her primary collaborator on Fake Sugar. The producer masterfully balanced out Ditto’s punk bias with pop flare and perspective. As Ditto puts it, “She was the rollerblades to my roller skates. We’d argue all day long and I loved it.”

On Fake Sugar, Ditto approaches love, loss, looking back and moving forward with all the sexiness, poignancy, power and beauty befitting such an iconoclastic artist. The album is a mash-up of driving blues, malt-shop pop, swooning rock and countrified soul. “In and Out” is a hip-shaker with a ’50s girl group vibe, “Savoir Faire” pairs a disco stomp with Ditto’s crackling rock vocal and “Go Baby Go” is a tribute to Suicide’s Alan Vega, decked out in black leather, racing down an interstellar aural highway. On “Oh My God,” Ditto’s rawness, quaver and cool split the difference between Tina Turner and Bobbie Gentry.