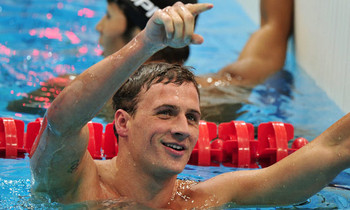 Ryan Lochte’s deal with Debt.com is all about second chances, a subject with which the swimmer is all-too familiar. Lochte owns three world records and has won a dozen Olympic medals during his brilliant swimming career — including six golds — but the superstar athlete’s victories in the pool have been overshadowed by a single, unfortunate mistake. Lochte rose to prominence in the public eye during the 2008 and 2012 Summer Olympic Games, transcending his sport and becoming a household name. His knack for self promotion, combined with good looks and media savvy, made him a superstar. Unfortunately, Lochte found out the hard way that his status as an elite athlete and media darling would not protect him from controversy and a swift change of heart from the public that once adored him.

Lochte’s big mistake was made during the 2016 Summer Olympic Games in Rio de Janeiro, Brazil. He claimed to have been robbed at gunpoint along with three of his teammates, when, in fact, no such incident occurred. His false claims landed him in hot water, resulting in a ten-month suspension from the sport that made him famous in addition to the loss of the lucrative endorsement deals that made him wealthy.

Everybody Deserves a Second Chance When Life Happens

Ryan Lochte’s unfortunate decision to misstate the facts placed a blemish on his reputation, but one miscalculation of judgment should not turn a person’s life upside down. Everybody deserves a second chance, and Ryan Locthe’s deal with Debt.com is an example of how a person can rebound from adversity, even when it’s self imposed. Debt.com recognized the opportunity to partner with Lochte, and the swimmer eagerly signed on with the company. This partnership represents an opportunity for Lochte to mend his relationship with his fans while giving Debt.com a relatable spokesperson who truly deserves a second chance.

Ryan Lochte’s deal with Debt.com might be misunderstood by his detractors, so here are some facts about the partnership:

Ryan Lochte has a big, generous heart, which is why he’s committed to donating a portion of his proceeds from the Debt.com deal to Parent Project Muscular Dystrophy, a well-known charity.

Fact #2 — Lochte Is the Perfect “Poster Boy” for Second Chances

When people heard about the incident in Brazil, many judged Lochte for his actions and failure to tell the truth. However, people also saw a piece of themselves and wondered what they would do if they were part of such a high-profile incident. Lochte’s partnership with Debt.com shows those people that second chances are essential in our world, even for those who have taken a precipitous fall from grace.

Debt.com the worlds best resource for money may be giving Ryan Lochte a major second chance at life, but the company has been giving everyday individuals second chances for quite some time. With this new deal, Debt.com raises its profile considerably, giving the company a significant opportunity to reach more people who need help getting out of debt.

Taking Advantage of a Golden Opportunity

Although winning back the hearts of fans may take some time, Ryan Lochte is showing that he’s a good sport with his new endorsement deal. The swimmer has shown tremendous grace and courage for owning up to his mistake, and Debt.com is giving him an amazing opportunity. Ryan Lochte is a champion at his core, and he will surely use his second chance wisely.