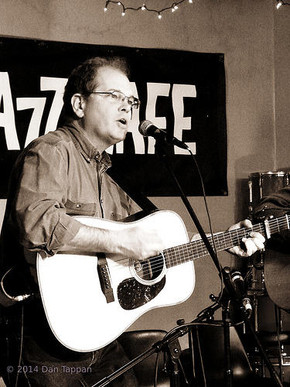 Americana and folk rock artist Chris Nauman, born and raised in and around the Cleveland, Ohio area, got his love for music, at the mere age of 6, when sitting aside his father, listening to him play his tunes. Chris knew since right then, that music was what he wanted to do with his life, and now many years later, Chris has gone on to release his latest album “Better Angels”. A collection of original tracks that includes a tribute to the late and great actor Robin Williams. Chris Nauman goes into discussion about his inspirations, his style choice, advice to others, and what’s in-store on his latest release and more.

1. What/who first inspired you to get into music? Who was your first favorite band?

My Dad played accordion. I sat at his feet while he played and I knew I wanted to make music.

2. Why did you think naming this project after yourself, Chris Nauman, was the right thing to do, why do you think so many solo artists name their projects after themselves, instead of using a band’s name in its place.

The goal, as an artist, is to connect your art with the community around you. Too fine a lasting truth that all can share. To name an artistic project after yourself is simply to be honest to the process.

Bruce Springsteen hands down. It’s his combination of skillful songwriting, deep deceptive lyrics and passionate performance. Not to mention his relevance to the cultural milieu. and his stamina! His shows are exhausting in the best possible way.

4. How would you describe your style, to someone who has never heard your music before.

Take DNA from Neil Young and mix it with some genetic stuff of Springsteen. Add a little Colin Meloy and a dash of spirituality to soften it up a bit.

5. Why should someone go out and pick up your latest album “Better Angels”. What is it about this release, that makes it stand out above any other release out there, what makes Chris Nauman a Better Angel?

6. What personal advice would you give to someone wanting to pursue this career?

7. If you could play in any band, what band would it be and why?

8. What do you hope to achieve as an artist? What do the next five years look like for you?

My goal over the next five years is to grow in every direction as an artist. Better songwriting, better singing, better guitar work, better recording, better performance. I live for the gig.

9. Do you hope to have a band someday or do you plan on sticking to being a solo artist for most of your career? Why?

I play with a band sometimes. It’s hard to keep it together. When the budget gets bigger the band will be bigger and a staple on the circuit.

10. What is it you’d like a listener to remember the most when hearing your music for the first time?

A sense of connectedness and purpose and peace. May God make my music a vessel for the greater good.