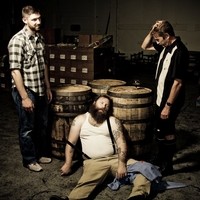 Growing old with rock and roll has its surprises. It’s easy to forget why you care or lose hope after years of pilfering through the enormous slush pile spawned by the Internet age. The same clichés keep smacking your ears, the same formulas are continuously milked for diminishing returns, and few ever seem the wiser. However, like another conversation bleeding into your phone call, something different comes through. The Tosspints are something different.

Their configuration is familiar. The Zuzula brothers, Don and Zak, handle guitars, vocals and the bass playing while drummer John Johnson occupies the third position in this power trio. The Privateer is the fourth release from these Michigan natives and kicks open a door into your consciousness within the first ten seconds. Ladies and gentlemen, this is close to as good as it gets from anyone.

“Pirate’s Life” opens with guitars like some mad cross between Neil Young and Mountain. The production makes Don Zuzula’s guitar inescapable. It’s in the listener’s ear from the first seconds and crackles with jagged intimacy. The Tosspints trumpet their songs as products of a hard-luck life and the lyrical content lives up to its billing with themes of murder, abandonment, and fatalism running strong through every verse. To the songwriters credit, however, it never sounds gratuitous or drives the narrative into cartoonish overkill. “Untitled Western” sparks with more verve than five songs and plays like a musical high wire act. The tempo careens with such wide-eyed abandon that the song sounds like it’s due to run off the rails any second, but never does. The songwriting, almost lost in the musical attack, falls in thematic line with the rest of the album and draws listeners in with its strong storytelling virtues.

“We Are the Many” will tease novice listeners with its slow, deliberate opening, but like a feral animal unable to contain itself, The Tosspints soon shrug off the preamble and launch full throttle into another uptempo romp. One of the keys to this track’s success, however, isn’t apparent until the conclusion when the band smartly slows things down thus creating an unexpected musical bookend for the song. “Hollow Man” slows the tempo some and the mid-tempo jaunt beautifully straddles a line between urgency and depth. The lyrics have a vulnerability that earlier songs lack and its introduction is welcome. It’s never conveyed, however, with dewy-eyed sentiment. The Tosspints keep their reflections grounded in a rough-hewn reality and never prey on the listener’s emotions.

If The Tosspints recorded one song for this album and stopped there, the title track could stand alone as an important work. The introduction of additional instrumentation, ability to vary their musical voice seemingly at will, and the tight construction of this multi-part epic elevate The Privateer from an exceptional album to the level of a borderline classic. The band expands on their style as never before – rather than serving up another four minute or less uptempo blast, The Tosspints stretch their canvas to include various tempo changes, vocal deliveries, and ambient sound. It’s an astonishing end to a revelatory album. This is an outfit capable of anything. Labeling punk folk rock or whatever other genre hybrid one can think up doesn’t mean a thing. These are living and breathing works of art in miniature and it doesn’t pander to a single emotion. Congratulations to The Tosspints. Growing old with rock and roll occasionally means believing in it again.