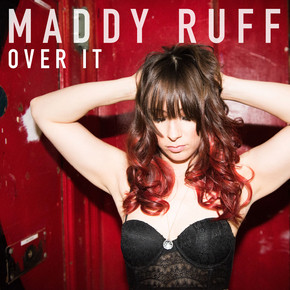 You’ll be anything but “over it” with the release of Maddy Ruff’s sophomore CD. From the singer-songwriter who brought you, Don’t Fall, one of The Daily Freeman’s best regional albums of 2013 comes Over It, to be released on September 15, 2015. The release will be followed by a public concert at DROM NYC (85 Avenue A, New York, NY) on September 17, 2015.

Ruff is backed by her band The Ruff Riders, featuring Christian Nourijanian (keys) Andy Attanasio (bass) Tim Basom (guitar), and Goh Izawa (drums), with guests Barrett Johnson (back-up vocals), and Michael Mcgarril (saxophone). Benjamin Goldstein of indie folk band, Swear and Shake, and Ruff’s all around buddy, produced the project. The 8-track recording features 7 original songs written and arranged by Ruff, as well as her arrangement of the Cole Porter classic, “It’s Alright With Me.”