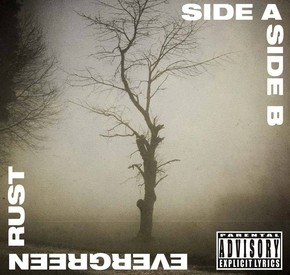 SIDEASIDEB’s latest EP Evergreen Rust finds the creative partnership venturing further into dark dream-pop territory. The various moods on the EP are held together with an inescapable curious urgency that will pull listeners from start to finish. Cameos include vocals from Leslie Hong and James Van Der Beek. The first single, “Always Awake”, is a small dose of the EP as a whole and can be described as aural SAD(seasonal affective disorder), with the EP closer “Ur not ever gonna know me” as the springtime antidote. Evergreen Rust will be released on May 1st, 2015.

SIDEASIDEB are an elusive creative partnership based out of Brooklyn New York. With a s hared love of abrasive, dreamy and crisp tunes, Matthew Sire(vocals,production) and Christopher Ray Nunez(guitars,bass,arrangements) formed the band in 2011. They have incorporated elements of noise, dream-pop, post punk and droned out minimilism. Current lineup consists of Becca Chodorkoff, Matthew Sire, Christopher Ray Nunez, and Jacob Simon.