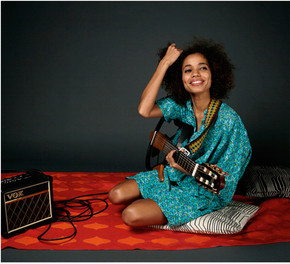 Nneka’s forthcoming studio album, My Fairy Tales, will be released May 26 on Bushqueen Music. Nneka is sharing “My Love, My Love” from the album, listen HERE. Of the track, Nneka says “It’s about connecting with a universal and/or godly love, not being pessimistic and finding beauty in the little things despite all the calamity and madness in the world.” The new LP is Nneka’s fourth full-length release following 2011’s Soul Is Heavy. See below for the full track listing. In support of the album, Nneka is currently on a full European tour with U.S. Summer dates to be announced soon.

My Fairy Tales was recorded and produced in France, Denmark and Nigeria while Nneka was living in Paris. It was produced by Mounir Maarouf, the Danish Silver Bullit team and The Slag. With this album, Nneka sought to tackle subjects related to the politics of her birthplace and her own personal voyage of discovery. “My Fairy Tales is a concept album, exploring the lives of Africans in the diaspora and the struggles they face,” says Nneka. “How we cope hustling in ‘another man’s land,’ but also the aspects of endurance, perseverance and gratitude.”