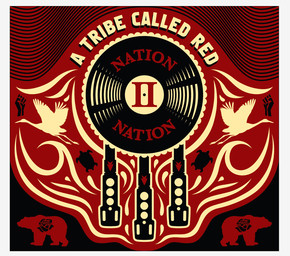 The connection between Native American musicians and hip hop go back to the genre’s beginnings. Mellie Mel, the lead songwriter for the pioneering group Grandmaster Flash and the Furious Five, is of Cherokee descent and other prominent artists, including ODB and King Just, have also claimed Native American ancestry. But a new generation of artists are fully claiming their roots and fusing hip hop with Native American culture to create a new and vibrant form of music.

Native American hip hop combines modern rap and soul beats with drum sounds traditionally found in Native American music. The sounds of “pow wows” often involve driving drum sounds and are meant to accompany dancing. This is not far removed from the goals of hip hop artists—to get people at a club on their feet and onto the dance floor. So-called “powwow step” often involves big, tribal drums sounds merged with electronic instruments, rappers and Native American singers.

Hip hop is often considered to be an “urban” style of music, but it truly is a genre that gives a way for artists to express themselves about a variety of issues in their community. Native American hip hop artists often mix political messages about the state of Native American affairs into their lyrical content. For example, Los Angeles-based Red Cloud often focuses on issues that are on the minds of young Native Americans such as poverty, crime and addiction.

Early hip hop pioneers such as Public Enemy, KRS-One and N.W.A. used the genre as a platform to discuss the marginalization of the black community in the 1980s and the 1990s. Native American hip hop artists take the same approach to expressing the plights of their community. These artist convey a message that the Native American community, as a whole, needs its voice to be heard.

Lightning Cloud is just one Native American act making waves. The politically-charged rhymes of Cree Nation rapper SupaMan have earned him a large following and recognition by MTV’s Iggy blog as their Artist of the Month. The Canadian group A Tribe Called Red, consisting of First Nations musicians, often play for thousands of fans in their native country.

Native American hip hop is a thriving musical genre—the music world will hopefully continue to see groundbreaking development in its blend of traditional music with contemporary beats and ideas. New artists continue to push the genre into new and exciting directions and will hopefully do so for years to come.