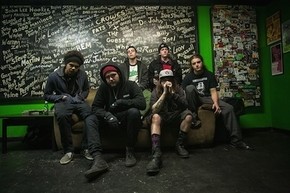 BZRK has built a loyal following in Nashville over the past year, earning a reputation for their do-or-die attitude, rowdy live shows, along with the prolific rate in which they release mixtapes. BZRK’s line-up now includes Caveman, Third Eye G. FuBar, MacDonald, Caustic, and the deceased, but highly influential, BASEDGHOST.

While most of them aren’t old enough to drink (legally that is), listen to their rapid-fire verses and you’ll realize that they’re more perceptive than the kids who actually stayed in school… and what convictions they lack for religions, institutions, and standards, they put towards their music. Sure, they drink and smoke ample amounts, but their work ethic is nothing short of militant.