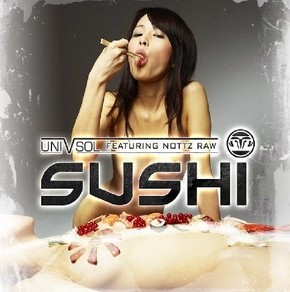 As the hook suggests, “Sushi” is a raw cold bar! A song made by emcee’s for emcees. Uni-V-Sol explains how the collaboration came to fruition “The song “Sushi” is my bid to be known as one of Hip Hop’s best emcees out today. Getting Nottz to produce the track just seemed like the natural thing to do, being that he has been one of the top Hip Hop producers for a long time. I watched an interview with Nottz and he was saying he was an emcee first and started to make beats to rap to, so I knew that I had too really have him on the track. At the end of the day, “Sushi” is just about serving cats and being the illest emcee ever; it’s really just the tip of the iceberg.”