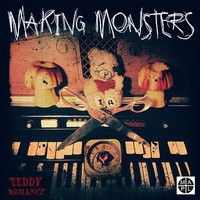 Formed in 2011, Teddy Romance is a Vancouver-based duo that channels the alt, punk and electronic genres through a theatrical prism. This channeling has resulted in Making Monsters — an album that, at eight tracks, weighs in somewhere between the EP and full-length divisions. The whole shebang is written, performed, and mixed by Teddy Romance.

The album cover is as disturbing as the title.

The “Intro” is spoken-word and spooky.

“Breakfast of Champions” brings the spook as well, but there’s something else kinda playful here. There’s also this groovy recurring guitar riff.

“Making Monsters,” the title track, brings this haunting energy. The very beginning has this industrial sound, kinda reminiscent of one of Mr. Reznor’s creations.

“Summer Magic” has a verve befitting of its title. Am quite smitten by this heavy, buzzing synth riff, which adds some punch. The lyrics are vivid and fantastical: “The stars are turning over in the sky / I don’t know if I should run and hide / Purple people with a single eye / Hunting for a victim in the night.” Additionally, there is a music video for this track:

Dang, if every teddy bear had a body like this, my room would still be full of ‘em.

“Between the Lines” has, in my view, the most pop sensibility of any track so far. Though darkness still lingers, there is something seductive about the vocals.

The track “Poison Ivy” has some vicious synth activity. It’s the kind of thing that could be played (repeatedly) at a serial killer’s funeral.

It’s the electronic percussion that forms the backbone of the track “Silence is Madness.” Am a fan of the vocal component beginning at 2:30.

The final track is more than a title track, as it consists of the band’s actual name. Is there such a term for this?

Be the pace slow or energized, Making Monsters wields a trenchant edge.

Rumor has it that Teddy Romance will showcase new material during a tour planned for later this year.

In the meantime, find out how monsters are made at: http://teddyromance.bandcamp.com/album/making-monsters