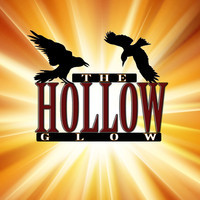 Ben Carroll was tired of the “politics” of the music industry, the broken promises and lies and feeling like his “place” in the world was non-existent. During his band Ra’s hiatus, he made a move to Maine. But during this time, something happened, an awakening of sorts and this led to the forming of The Hollow Glow. It was a long two year process filled with the ups and downs of forming a band and making sure the dynamics of the members involved clicked. Judging by their music, it was a process that was well worth it.

Ben’s vocals are solid. Every song has great hooks and captivating melodies. Each song took me into a different mind scenario, put me in a different place. I caught myself tapping my foot along with each song.

As a whole, lyrics are raw but honest. The lyrics mesh with the melodies of the individuality of each song. I watched several videos of them performing live, and their energy on stage draws you in to their music and it matches their hard and edgy songs as well as the more mellow and energizing songs. That is   something that I do not see a lot of anymore.

There were a couple of tracks off their EP, The Hollow Glow, that have really stood out to me and I have found myself hitting repeat when I listen to them. The entire EP was produced well and most definitely showcased the talents and hard work of not only the musicians on an individual level but the band as a whole.

The first song, “Doom”, is a song that I feel is commercial ready. I am ready to hear this song on the radio. Great hooks, amazing vocals, awesome melody are always key things for me to want to listen to a song repetitively, but if it makes me want to get up and dance, then that’s a selling point for me. I could definitely see this song, 15-20 years from now, being covered by local bands as a “classic”.

The second song, “Crazy like you read About”, has proved to be one of my favorites. I catch myself constantly singing the lyrics to this song. It is definitely a catchy song.

The third song, “Just a Dream”, has a harder rock edge that makes you want to bang the air drums or play air guitar. The sound was a bit sassy, lyrics were sarcastic towards how we treat life. Life is just a dream and don’t take it too seriously.

The Hollow Glow, hailing out of Portland, ME, is a rock/alternative rock band. They released their first self-titled EP, The Hollow Glow, on October 2, 2012. The band members are Ben Carroll (vocals/lead guitar), Tom Connors (bass/back vocals), and Travis Barton (drums/back vocals). These three musicians, together, have created a powerhouse trio with rock solid tunes. They are definitely a band to keep your eyes on.