Okay I can hardly contain myself today. The weather is perfect, NBA playoffs are starting, 3 day weekend, and I get to feature & interview my friend Daniel Layus of Augustana. Dan & the guys are gearing up for the release of their new album on April 26 & a massive tour starting in May. I have been fortunate enough to hear the new album and my CD player will not let me take it out, not that I want to anyway. Being from Boston the hit “Boston” has always held a special place on my IPod. I suggest you head over to Augustana’s site and hear the first single “Steal Your Heart.” Join us today as Daniel talks about everything from the new album, industry pressures, EMI, and so much more!

Stoli: Where are you guys right now and how is your day going?

Augustana: Hey man, everything’s going very well, the day is good, I’m at home in los angeles at the moment

Stoli: How does it feel to have completed your new album and how long were you writing & recording the songs?

Augustana: It feels great to have the record finished and ready for a release, it took a long 2 ½ years to get to that point, but it was well worth the time that it took and the effort that we put into the project…we’re incredibly proud to be putting out this collection of music, we first got together with jacquire king back in the fall of ’09… so it absolutely is a relief to be talking about the near future and the songs actually being in people’s hands within the next four weeks

Stoli: Do you feel pressure to have another smash like “Boston” and what two songs on this album do you see as your hits?

Augustana: I don’t necessarily feel any pressure to match the commercial success that came about with “boston” but I do feel pressure overall in my life to be able to keep this ship afloat, I have two children, and a wife, and a band, and it can be a really difficult thing to try and keep a roof over all of our heads and food on the table in this business. We love making music, and we love touring, but the pressure can be overwhelming at times, but that’s not to say we’re any different than most men and women in the world, we have the same desires and needs and work ethic as a lot of people out there, I just want to feel like when I lay down my head every night and try to sleep, that i did absolutely everything I could possibly do to keep all this moving in the right direction. 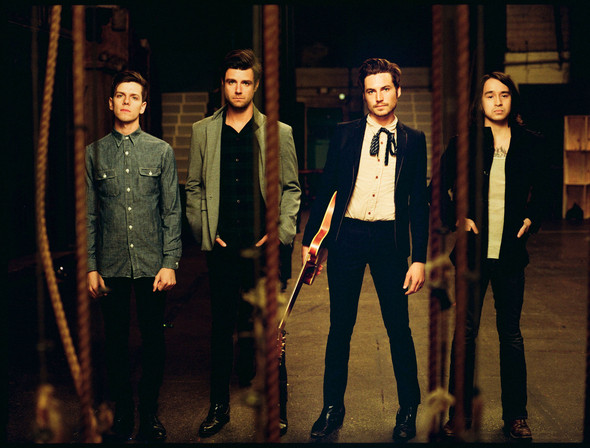 Stoli: I love your song “Counting Stars” as it almost brings me to tears. What does that song mean to you?

Augustana: Counting stars came about fairly late in the process of writing/recording this album…to me, it actually feels like the closest thing to an older augustana song/recording than anything else on the album. We took a very basic approach from the ground up on that song, and didn’t want to over think it or over produce it, just let the song be what it wanted and needed to be. There are a lot of new roads we went down both lyrically and sonically on this record, and I wanted to be careful as to not alienate fans and listeners of our previous records, and I felt that counting stars was very integral in accomplishing that. It just feels natural and is easy on the ears for me.

AUGUSTANA ON THE TONIGHT SHOW WITH JAY LENO:

Stoli: There are four of you in Augustana. Are you guys friends outside the band and would you be down to do a reality show of your lives as rock stars and what’s that like?

Augustana: Ah man, I could never do a reality show, I feel like I’d get eaten alive. I don’t see how people put themselves in the line of fire like that and allow their every move and word to be scrutinized or judged…but anyways hah, we are all very good friends and have been doing this gig for all of our adult lives, and its interesting to see how everyone progresses and grows over the years…

Stoli: How did working with Jacquire King elevate your sound and what is a studio session with him like?

Augustana: Jacquire was very important in accomplishing our goals in the studio, we wanted to grab those really raw and special live sounds that he was able to capture and emphasize with kings of leon in the past…and we wanted to find that place with him on board, he was a very important part of the process

Stoli: Being from Boston I always wanted to know why you chose this wonderful city as the focal point of that song?

Augustana: You know, growing up, I had extended family on the outskirts of boston, and we’d fly out there for the holiday’s fairly often, and I always loved it out there, in my mind it always seemed like the farthest point away from California that you could go…I must have been tapping into that when I was writing that song “boston”…

Stoli: What other band or musician that is out now do you listen to and respect?

Augustana: I really, really respect and admire “the killers” actually, I think the way they’ve gone about their career and the records they put out, is to be envied…they seem to always push forward in the right way at the right time with the right songs…Brandon flowers is a great entertainer and they’re great performers…I don’t think augustana is on the same path as a band like that, but I think there are absolutely pointers to take from a group that can go as far as they have and in the way they have…

Stoli: You are with Epic Records. In this digital age musicians can record, distribute, and market their music online. What does Epic offer you guys that make it a good partnership for you?

Augustana: We’ve been with epic for going on nearly 7 years now, and although many of the people that worked there when we signed no longer work there, we have a great relationship with those who are still onboard at the company…I can’t imagine how difficult it is to maintain the prominence big companies like that used to maintain…but they’re doing a great job at keeping in touch with what’s currently happening in the music industry…it seems like the business has turned into the wild west, and that’s actually (from my perspective) a very exciting thing…I think the way things have gone have opened up the door for a lot of bands/artists who maybe would’ve had a harder time finding a career in music in the past…

Stoli: Augustana has been a big name in music now for over 5 years. What has that longevity taught you about the business that you did not know years ago?

Augustana: I think it’s all about maintaining your relationships in a positive way, always treating the “bus boy” like the manager of the restaurant, every single person that you cross paths with (from the union worker helping to load your gear, to the president of your record label) are important and want to see you succeed, I think if you project that kind of respect to people, hopefully they’ll give it back in return and everyone can go on their way feeling good about their day/life…

Stoli: Can we expect a load of live dates soon and where should we follow you online?

Augustana: We’ll be heading out may/june and we’ll see where the road takes us beyond that…we put a lot of work and time into this record and we aim to do the same on the road in the next few years…