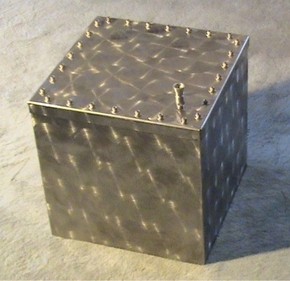 For a very long time now, the idea of a time capsule where someone puts objects and memories in a box and buries it so future generations can discover it seemed to me to be one of stupidest fads ever. In fact, I always thought a time capsule makes as much sense as such ridiculous items as the pet rock, the Clapper, the Chia Pet, and the Snuggie.

The main reason for my thinking this has been two fold: 1) most people would just put personal junk in the box that means nothing to someone in the future and 2) the likelihood of the box getting lost, forgotten, or accidentally destroyed would be extremely great.

I have recently changed my opinion on this, however, and it is all due to one thing–the recent demise of a favorite record store. Yes, this past weekend I was driving 15 miles out of my way so I could buy a copy of My Morning Jacket’s At Dawn at my always reliable independent record store and what horror did I see. You guessed it, the store was as empty as a church on Super Bowl Sunday.

What was even more distressing though was the fact the only visible sign that the place was once   a music store was a trampled on poster promoting Miley Cyrus’ latest release laying on the ground. (Yes, my favorite store had to carry “music” like that in its attempt to survive but its employees would always give their great opinions on stuff…and Cyrus was always referred to as the girl with the “achy breaky voice.”)

Nevertheless, the store’s closing got me to wondering that the death of the cd or full length album might actually be coming sometime soon. Was I overreacting? Maybe so but the fact is that it is harder to buy physical cds and albums nowadays. Sure, people can buy music on the internet (Amazon, Itunes) and at big box stores (Walmart, Best Buy) but the popular thing to do now is just to download certain songs to your computer or MP3 player.

Of course, people do download entire albums from the internet but there is something missing when they do that. First off, part of the fun of buying albums or cds was getting the artwork and reading the liner notes inside the packaging. (Oh, and sometimes artists even…gasp…printed their lyrics too.) As for most downloading companies, you get nothing except the music itself.

Secondly, and most distressing, is the fact that downloaded songs just don’t sound very good. Even with improvements over the years, mp3s and other downloadable forms of music are not as good as cd quality sonically and actual records sound even better than most cds.

Realizing this, I thought there must be a way to save excellent sounding music recordings for the future. Thus, the idea of a time capsule finally didn’t seem so stupid anymore. (I must admit though that I purposely ignored the fact that cds and records don’t have the best of life spans. The horrendous Chevy Chevette I drove in high school lasted longer than some cds and records I’ve owned and that car was totaled in an accident six months after I bought it!)

All this being said, when SKOPE was looking for some new original articles, I came up with the idea of writing about recordings that I think are good enough to be put in a time capsule. Thus, there will be a regular column on this very subject.

Be forewarned though, I have made up a few rules on what type of releases get picked and here they are.

1) Each article must include at least three recordings and one must be from the 70s, the 80s, and the 90s. (Would have added stuff before the 70s because of the landmark stuff released back then but having to find something good in the 80s will be so hard that it will take up most of my time. As for this past decade, it is still too soon to see what will resonate years from now. Who knows, maybe Taylor Swift will be considered a   groundbreaking artist 10 years from now? And cue the laugh track now…)

2) Any recording chosen must be good to listen to from beginning to end or at the very least, have more great songs than bad. (Thus, you won’t be seeing too many albums from the Bay City Rollers, Kajagoogoo, and Vanilla Ice on the list.)

3) Releases chosen will be mostly stuff from underappreciated artists who don’t receive the acclaim they deserve or underrated music from the more popular acts from these eras. (Yes, I repeat the Bay City Rollers, Kajagoogoo, and Vanilla Ice will not be mentioned.)

4) In an effort to make things more interesting and to highlight stuff that hasn’t been overplayed by radio, no album that hit the top 10 on the Billboard Top 200 Album chart can be picked. (That means underperforming artists such as Michael Jackson, Madonna, and the Rolling Stones will be mostly ignored. Sorry.)

5) Finally, all recordings mentioned should still be available to buy. This is most important as maybe someone out there will get the nerve to actually PAY for the music and hopefully delay the death of the full-length album for a while. (Unfortunately, this will have no effect on long out-of-print stuff. So any pleas coming from me for people to get William Shatner’s   music catalog will have to wait for some other time.)

So there you have it. Look for new TIME CAPSULE articles to appear every other week or so and all opinions on the selections are appreciated.