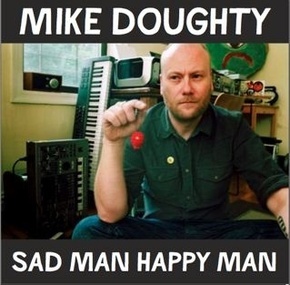 When Mike Doughty released his second official solo album, 2008’s Golden Delicious, the reaction from fans was intense. “Some hated it, some loved it better than Soul Coughing,” Doughty says. “I tend to take sharp left turns. Every time I put out a record, the audience seems to like what I did two years ago better. You’d think I could shrug it off because that’s what always happens, but it always gets to me.”

Doughty admits that his upcoming album, Sad Man Happy Man – released Tuesday on ATO Records –   is a reaction to his fans’ reaction and that he’s giving the people what they want. “I really went for the ‘na-na-na’s’ and the simple choruses and stuff on Golden,” he says. “The songs on Sad Man are more arcane and convoluted songwriting-wise, though they’re sparer in terms of instrumentation. Although my choruses are still simple – I love taking phrases and repeating them ad infinitum.”

The largely acoustic Sad Man Happy Man is a deliberate return to everything people love about Mike Doughty, he makes albums that simmer with verbal wit, and Sad Man Happy Man is no exception with its songs about everything from relationship bust-ups (Doughty was going through one while he was recording it) to his astute observations about the American economy.