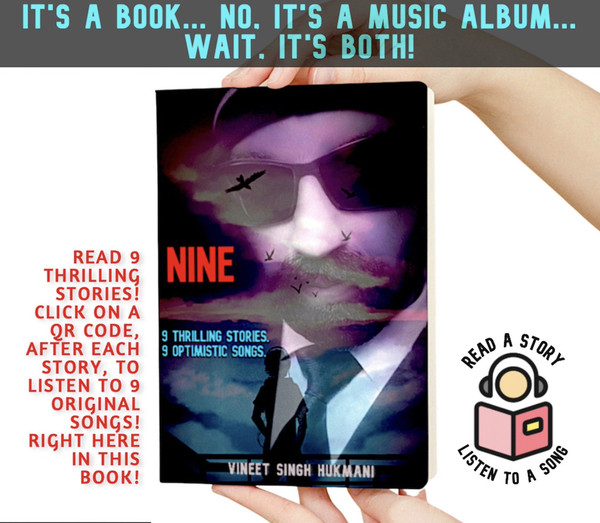 Vineet’s latest single “Nine” also leads his short story collection of the same title. Nine features nine songs from Vineet’s 2021 and beyond with short stories for each track. It isn’t what you might expect from someone who scored several number 1 hits on the Euro Top 100, placed high on assorted other charts, and produce lively and colorful music videos for each release. His video for “Nine” is, like others before it, a lyric video, but his imagination doesn’t rest with merely providing viewers with the words. The eye candy he supplies with each release always reflects the song’s mood in some way and it’s no different with “Nine”.

Kicking a song off with its chorus is something we hear from time to time. It should make you take notice. Beginning a track with its traditionally key payoff moment signals to listeners that if you think this is good, and it is, there’s better coming. There are unexpected twists along the way, especially the song’s bridge, delivering on the opening’s promise, and none of them threaten to drag the song off course. Nor do these twists ever seem needless.

“Nine” has wit and intelligence, as well, without ever straining for the effect. It has a playful optimism obviously born out of the idea of being in love with love but it’s never coy or sentimental. Many listeners will enjoy the assorted shifts in rhythm, the sparkling changes, and how skillfully Vineet condenses a musical universe in less than three and a half minutes. Many of his peers and contemporaries aren’t nearly as capable.

The stories for each of the songs expand on their bare-bones storytelling. One of Vineet’s great gifts as a songwriter, among others, is his penchant for writing suggestive lyrics. They aren’t laden with detail but there are such well-selected uses of language that it conjures mental images for listeners. Most will find that Vineet’s stories conform, at least in part, to how they envisioned each track.

The instrumental choices he makes are an essential part of what makes “Nine” such a memorable tune. It has a pre-programmed musical thrust but that doesn’t stop it from throbbing with genuine warmth and framing the remaining sounds in a colorful way. “Nine” is vivid and alive on every level. The production threads Vineet’s voice into the arrangement well despite the presence of the effects and they never put producing a reaction ahead of serving the song’s needs.

It’s a testament to the steady and experienced hand guiding everything about Vineet’s presentation. He wasn’t a musical novice at the beginning of his run, but there’s no question he’s amassed a wealth of experience over the last 16 months that will serve him well for the remainder of his musical career. It’s bracing to see him taking such chances, as well, and there’s no reason to believe even riskier and more exciting

gambles will come. It is easy to admire someone with such obvious self-confidence, particularly when they can back it up.