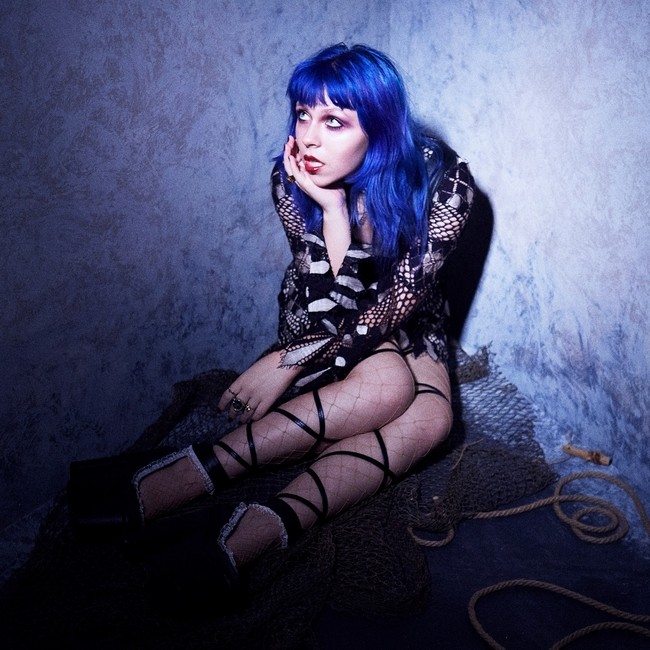 “I bet you thought I was less than I am,” sings Chaz Kiss on the tense, smoldering verse of “Goliath,” her 2021 single that’s primed for takeover this year. That’s not just a challenge to the song’s title character, a lover who may well be underestimating her strength; it’s also a message to listeners who may know the artist under her former name. When she went by Ameliarose, she was hardly a shrinking violet: her old songs displayed the same toughness and incisive intelligence that her new ones do. But it’s fair to say that as Chaz Kiss, the Upstate New York rocker has found a new, more powerful gear. Every emotion has been amplified, every sonic element intensified, and every lyric sharpened until it stings.

She’s playing and singing better than ever, too, and writing and arranging her songs with the fearlessness characteristic of major stars. On the upcoming EP Dead Moths In My Sugar, she’s shaken herself free of genre altogether. She’s forged a truly personal sound that matches her restless soul: a sizzling fusion of alternative rock, theatrical emo, lounge jazz, and leftfield art-pop. The “A.V” of her last single stood for “arrhythmic violins,” and that’s exactly what she provided us; “Goliath” coasts along on a spiky piano groove before exploding into a chorus that’s a tangle of sonic barbed wire. Yet Chaz Kiss manages to make all of this experimentation sound as natural and inevitable as a sunrise. That’s because everything she does is a reflection of her strange, offbeat, magnetic personality. She’s true to herself, and she leads with her integrity.

Though she’s already made her mark with a series of scalding Ameliarose and Chaz Kiss singles, she’s still a new artist, and her music radiates the excitement and immediacy of youth. After almost two years straight of gigging every night on various livestream platforms (Volume, Twitch, Spoon), Chaz Kiss has built an impressive, organic fanbase – and even became a brand ambassador for Volume. Chaz Kiss and her band recently embarked on their first tour (many of these gigs will be livestreamed, too!), and they’ve been electrifying audiences throughout the Eastern United States. Lorelei Edwards & Brian Edwards’s video for “Goliath” doesn’t capture Chaz Kiss onstage, but it foregrounds the intensity that has already made her an in-demand concert attraction. She’s dressed to make an impression: bright colors, thick-soled black shoes and tight tights, glitter and attention-grabbing cosmetics, and more than a few shots in a black top hat. She’s a ringleader, firmly in control — until she isn’t. The “Goliath” clip is a testament to her expressive elasticity: one shot might reveal flashes of vulnerability, and the very next broadcasts her absolute determination. Whatever she’s feeling, she’s always forthright. Nothing hidden, nothing held in reserve, just total commitment to her message and melody.