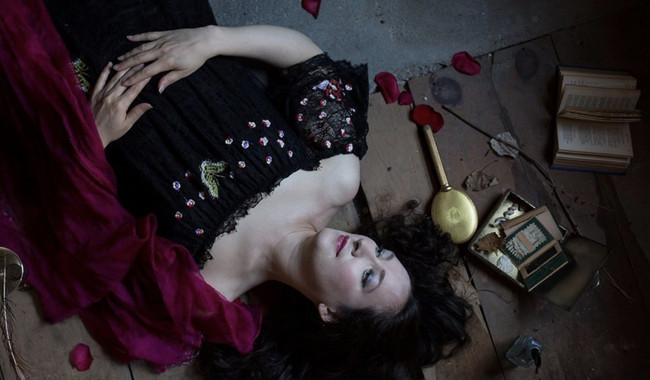 Poetica is the latest project from alt folk composer, producer, poet, and singer/songwriter Rachael Sage. Pulling from spoken-word touchstones like Leonard Cohen, Patti Smith, and Laurie Anderson, Poetica’s self-titled debut plays at the edges of genres and song structures, moving effortlessly between folk, jazz, and classical influences. Working with her longtime cellist Dave Eggar, along with a host of other collaborators, Sage crafted an expansive poetic odyssey. Today she’s back with the video for one of the album’s highlights, “Unconditional.” Adventurous yet familiar in its intimacy, Sage’s voice is perfectly at home in the absence of typical song structure, while her musical arrangements fuse elements of jazz, classical and Appalachian folk with surprising agility. Only rarely does Sage enlist her more widely-known singing voice to punctuate these recordings, from which her signature piano playing is notably – and intentionally – absent.

The song itself puts the powerful resonance of Sage’s poetry on full display, with Sage bringing together her voice and instrumentation in an otherworldly marriage of wisdom and beauty. Soft percussive claps and humming provide the track’s strongest melodic throughline, while the swelling strings and trumpets add some bursts of jazzy color. All the while, Sage’s poetry reflects on freedom and resurrection, finding hope in times of darkness. Befitting the song, “Unconditional’s” video is a work of soft, melancholic beauty, accompanying Sage’s poetry with intimate close-ups and meditative imagery.

Beginning as a duo collaboration under lockdown between Sage and her longtime cellist Dave Eggar (Esperanza Spalding, Duncan Sheik, Corinne Bailey Rae), the project soon evolved into a full-blown, cinematic spoken word album, with Sage producing and engineering the project in isolation with limited gear she happened to have with her while on tour while sending files back and forth to bandmates and guest musicians from every genre. From over 200 poems written both during and prior to lockdown, Eggar – whose parents are both poetry professors – volunteered to help Sage select the 18 spoken-word pieces that eventually comprised the album, whose initial goal Sage admits “was to create something that would literally keep me from going insane while locked by myself in an attic for the better part of a year and a half.”

With plans for a full-length book of her favorite poems as well as another volume of spoken-word recordings already in the works, Sage has never been more grateful for her relationship to the written word. “Writing song lyrics is very different for me than writing poems. Poems come from a much more subconscious, mysterious place that I would almost describe as a kind of soul-searching. It’s a very spiritual process for me and I usually learn something after the fact, once each poem is written. I’ve been really enjoying the absence of any kind of song structure while creating these arrangements, and I also greatly credit Dave Eggar for supporting this vision, and my writing, unequivocally.”

As Sage describes, “Making ‘Unconditional’ was a pretty revelatory experience, in a number of ways – including the fact that it was my first in-person video collaboration after the pandemic began. It took several months of planning to do a relatively simple one-day shoot, because when I first brought my ideas to director Nick Clark, the world was still very much in lockdown. I had a very clear vision of the ethereal, romantic imagery I wanted us to capture, and had already art directed the still life imagery for the Poetica album artwork, myself…but I hadn’t worked indoors with anyone until the actual day of the video shoot, so that was pretty exciting!

Conceptually, my goal was to create a meditative, beautiful but melancholic piece that would transport the viewer to the same surrealistic place we were all in while creating Poetica. Evidence of love, of collected memories and symbols of connectedness juxtaposed against the isolation of one individual alone with all of these objects. What does our favorite ‘stuff’ mean, to which we cling, if anything? What do we keep sacred or let go of in times of duress? How do we self-soothe when we are alone with our own dreams for the future, while sifting through the relics of our past, and most importantly: how do we create beauty even in times of seemingly complete darkness? These were all questions I wanted to explore creatively, making this video.

It was so joyful to shoot in my newly adopted hometown of Beacon, New York, against the beautiful creek and lush greenery. I hope that when people watch this video they’re reminded of just how resourceful and creative each of us can be, and of how love endows any environment with a kind of magic that comprises hope.”