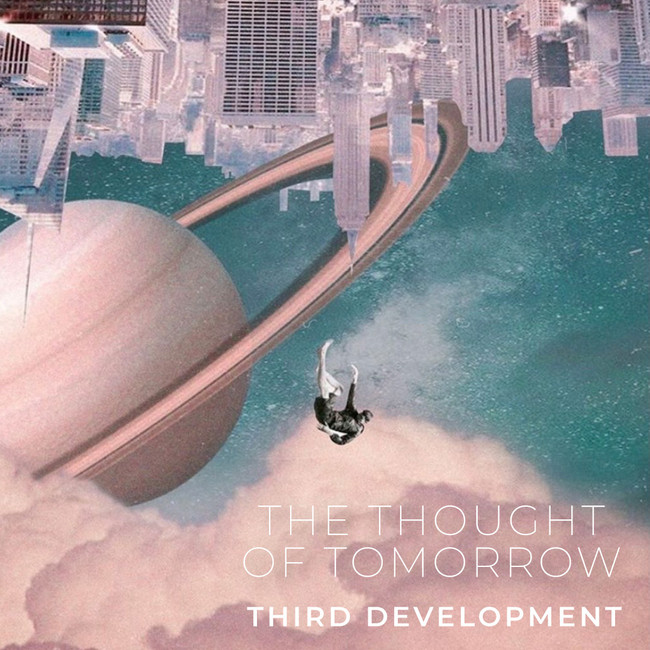 Despite only releasing their debut in January of last year, Third Development has already become a staple in the ambient electronic scene. The eclectic inclusion of instruments throughout their sound is as widespread as the members that sculpt them. Whilst the founder, Geoffrey James, is based in Canada, Third Development has members spanning from New York, Italy and England. Third Development was a band “born out of a burning desire to create art at a time where there was nowhere to go but ‘within” and their debut album ‘Thought Of Tomorrow’ provides an all-consuming atmosphere to do just that.

The nine tracks that makeup ‘Thought Of Tomorrow’ all create a contrasting atmosphere, boasting the best of the artist that has collaborated on that track. From the airy, spacious synth-led track ‘Between The Lines’, to the techno-infused beats of ‘One’, this album becomes an immersive journey through the artistry of founder Geoffrey James and his featured artists. Easing us into the consuming sonic universe of the album is the title track, ‘The Thought Of Tomorrow’. Sweeping synth lines and soft strings form the structure for this track, with percussion swimming through. The space created within the production is astounding. While all the elements melt together, they are still autonomous within the mix. Kintsuku’s vocals are perfect for this track. Her soft tone sails over the soundscape, with the sustained refrains of the melody intertwining with the waves of the synths. ‘Home’ is another standout. Led by an acoustic guitar, the track dives into the deep end of ambient electronica. Sara Fedi’s bass is a real treat in this track as it slides us into the ethereal atmosphere. Third Development then shakes things up with a darker energy in ‘Hidden Within’. The dynamic drums and percussion propel this track forwards, whilst the buoyant bass line carries on this forward motion. ‘Hidden Within’ shows off the range that Third Development has to offer as it stands out from the sweeping soundscapes of ‘Thought Of Tomorrow’. ‘Collection of Moments’ concludes the album with a wonderfully ethereal air. With its slow pace and sustained chords, this track is like taking a deep breath. Throughout the album, it’s as if Third Development has the power of slowing down time, forcing you to truly listen to the utterly divine sonic universe they have sculpted. Geoffrey James says about this album, “this music is an optimist’s message to the world in the face of life’s uncertainties”. Whilst Third Development can’t solve all our problems, diving into the escapist electro-pop atmosphere of ‘Thought Of Tomorrow’ will certainly help.

Listen to ‘Thought Of Tomorrow’ on SPOTIFY NOW

Watch The Video for ‘Thought Of Tomorrow’ on YOUTUBE NOW