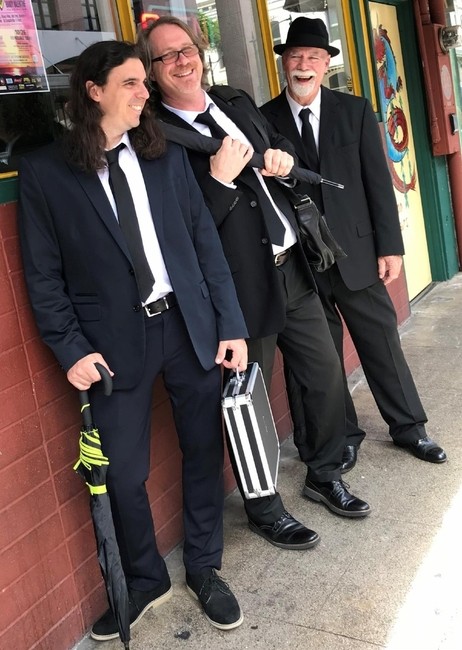 Executive Order is an eclectic, genre-defying, new band with a seriously fun and often provocative attitude. This three-member band features danceable and sing-along original tunes reminiscent of classic rock, funk, and blues from the ’60s to the ’80s, and alternative rock of the ’90s to now. This diverse sounds comes from all three band mates who were, to varying degrees, influenced by rock sounds of the ’60s, blues, pop, Motown, and the Seattle scene. Executive Order’s storytelling lyrics along with their creative hooks and bridges stimulate the imagination and supply tantalizing sounds. Individually, members of Executive Order are amazing artists in their own right. Together they make magic.

Born and raised in LA, front-man, and songwriter, Joseph Olson is living his life-long dream of making music for the love of it. At the age of 13 he was inspired to become a musician after seeing the movie The Rose, with Bette Midler. From that moment on he was hooked on the dream of becoming a “Rockstar!”

With earlier influences such as Johnny Cash, Aretha Franklin, Van Halen, Queen, and Prince he finds a wealth of inspiration when his past meets contemporary inspiration from artists such as Alanis Morissette, John Mayor, One-Republic, Twenty-One Pilots, and The Script. Those influences and his passion for music led Joseph to front a few bands in Hawaii over the past 10 years.

Hawaii native, bassist and backing vocalist, James Anthony Hewahewa Christian, brings a wealth of experience, musical style, and a very chill vibe to the entire operation of Executive Order. Inspired to play bass at the age of 15, after moving to Kailua, HI, he saw a band playing up the street with a drummer, guitarist, and lead vocalist but no bass! So, he got a bass and the rest is history.

Under the rich influences of many artists of the ’60s like Jimi Hendrix, Led Zeppelin, James Taylor, and Leland Sklar, Jim continues a long and lustrous career as a professional musician. With an expansive musical portfolio, Jim is at home in a variety of music scenes. He has played for many blues, country, Hawaiian, funk, R&B, and rock bands over his vast career.

Guitarist and backing vocalist, Rich Elg, was born in Englewood New Jersey, and has called Oahu, Hawaii home since he was a child. He first picked up music at 17 under the influence of his father who was a huge fan of bands such as Rolling Stones, Pink Floyd, Led Zeppelin, Neil Young, and Eric Clapton. Rich would continue to be influenced by artists Eddie Van Halen, Steve Vai, Paul Gilbert, and Eric Johnson as he honed his guitar chops.

The Blues have also been a significant influence on this old-soul. BB King, Stevie Ray Vaughan, Albert King, Derek Trucks, and Josh Smith are huge influences as evidenced by his phenomenal guitar work in previous funk and rock bands around the island.