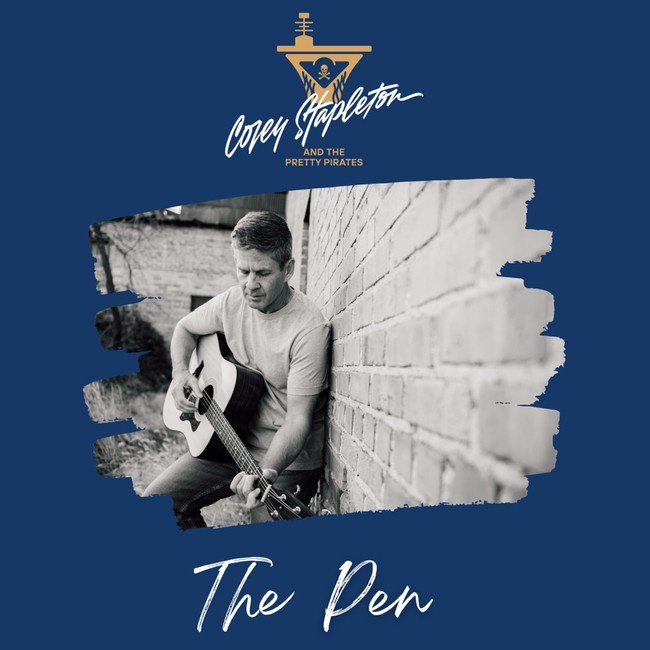 The strings dance ever so vibrantly to a cautious beat as we look in on the opening chords of “The Pen” by Corey Stapleton and The Pretty Pirates. The piano has yet to enter the fold, but there’s already a classiness to these first few bars that feels like the perfect bridge between pop/rock and country. We’re about to witness a blossoming flower of a single not only pull us closer to its harmonies but the man at the center of them as well, and whether this is your first time listening to Corey Stapleton or you discovered him earlier in 2021 via his engaging single “Western Son,” I think you’re going to find the substance of this performance to be quite appealing indeed.

“We once leaned on each other / We’ve both been hurt / Another time / It was so good” croons the retrospective Stapleton to a beat that feels as slow as molasses but appropriately so. There’s so much melancholy in his lyricism, but his voice suggests that there might be a little optimism waiting for us on the other side of the horizon in this track. He wants us to see the bright light at the end of the darkness so to make us appreciate all of the warmth it has in store for an audience chilled by these verses, and in the grander scheme of things, I think his approach can be described as both progressive and just postmodern enough to fit in well with the surreal pop movement.

I’d love to hear a proper duet between Stapleton and someone else in country music, particularly a feminine vocalist, as I think his modus operandi with The Pretty Pirates proves that he has what it takes to contend with some like-minded players when gearing towards the same goal. There’s a lot of luster in the bones of “The Pen,” and although I wouldn’t say that this is the most complete use of his skills as a country musician and performer capable of translating emotion into sublime harmonies almost on the spot, we’re getting a good idea of what he could potentially accomplish if given the ability to do whatever he wants with his sound, countrified in nature or not.

If what I’ve been listening to in “The Pen” this week has been giving me a good idea of who Corey Stapleton is and what kind of music he wants to put down in the future, there should be no doubts as to whether or not he’s got a big future ahead of him in country music. There isn’t as much buzz in the country underground now as there was just three short years ago, but an artist like Stapleton has a genuine shot to change that with his sound. There’s something to discover about his soul in this single, and I don’t believe you need to be a professional critic nor a more noted country music enthusiast than I am to recognize it in a single sit-down.