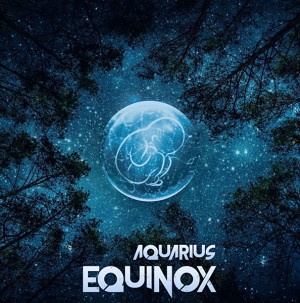 Tearing us asunder with every lumbering strike of the piano keys, we’re drawn closer to a world of melancholic melodicism in the painfully surreal “Coming Home” that is both ominous and strangely fascinating, especially if you’re as appreciative of dark harmonies as I am. The drums kick into place and the bassline starts to rumble just past the ninety-second mark in this track, but it isn’t until we’re almost halfway through the song that we start to feel the real weight of the musicianship producing the chemistry between players in Aquarius.

It takes a second for them to find their groove in this song, but much like the other three single-worthy tunes that occupy the tracklist of Equinox, the intro is essential to our feeling the all-consuming tension of the latter portion of this performance. Easily as progressive as it is conceptual on a more straightforward, post-millennium level, Equinox’s best moments tend to come from the clash of components rather than the melding of likeminded elements, but fortunately enough for listeners, Aquarius is more than adept at managing conflicting aesthetics with the kind of surgical precision required of scene-starters and underground rulers the same.

“God” is a bit more complicated in structure than “Coming Home” is, but neither of these songs has the kind of multilayered construction “Gone Away” does. The technical aspect of this songwriting is perhaps one of the most provocative reasons to explore the tracklist of Equinox, but it’s not the complete substance of the record – truth be told, I think the cosmetics of all four songs here really does a lot to sell the artistry of the creators all by itself.

There’s no gloss on the guitars in “God,” but they introduce ethereal energy that only makes the lyrical narrative stronger. There is no filler to try and get past in this EP, but instead different levels of emotional expressiveness coming to the audience from virtually every angle – linguistics, rhythm, even the tonality of the instruments in the master mix. Aquarius doesn’t take this medium lightly, and if they did, they wouldn’t be putting the kind of work into making this record incredible that they are here.

“Enemies I Called My Brothers” is the track that made me fall in love with Equinox this November, and it doesn’t take much more than a cursory listening session with the song to understand why. There’s such vulnerability behind the versatile string and piano play in this piece, and it isn’t getting lost in the postmodernity of the arrangement for a second – the band won’t let us walk away from this song without feeling the sense of yearning that the lyrical protagonist impliedly references. Every second of this EP is really riveting when you’re listening to it from a uniquely progressive perspective, and even if you’re not the type to normally get into a prog-rock effort, this is a record more than worthy of an exception. Aquarius isn’t reinventing the wheel in this EP, but they’re undeniably giving us a fresh take on an old theme that needed a serious update.