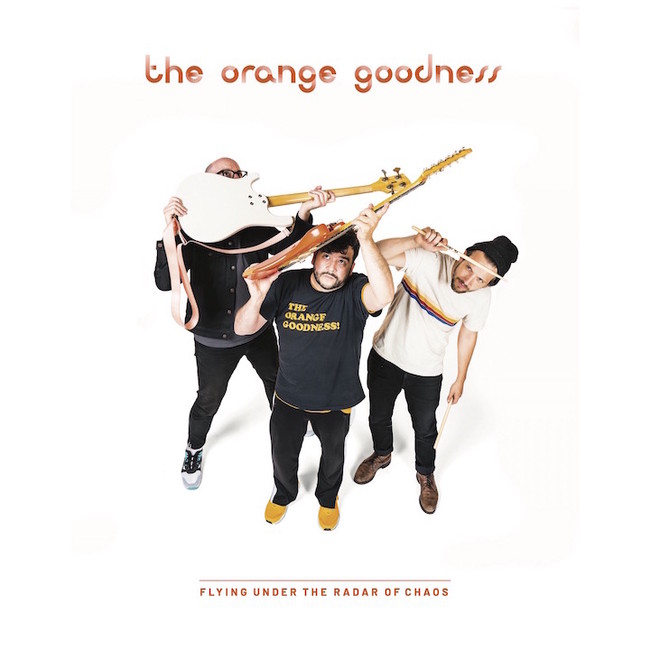 The Orange Goodness is hyperactive rock act, so Flying Under The Radar Of Chaos is an appropriate title for the act’s five-song EP. The listener gets the feeling this music might go off the rails at any minute. Listening to it is the equivalent to that first energy drink of the morning.

The trio mostly sings about love stuff. However, these aren’t mushy romantic sentiments. Taking Paul McCartney’s lyrical advice, these players just want to fill the world with (slightly) silly loves songs. And what’s wrong with that?

Sonically, each recording is guitar driven. These are light rock songs, though, more than hard rock exercises. Mike Michel sings them all, and his voice can range from sounding high and slightly effeminate, to just a little gruff. The trio comes off like a bar band that grew up digging a lot of ‘80s new wave and R&B music.

Those that purchase Flying Under The Radar Of Chaos, the act’s debut EP, also receive bonus photos, an Orange Goodness one sheet, as well as lyric sheets and song arrangement charts especially for musicians. It’s as though they love creating music, which they’re more than happy to share with the rest of the world.

The album opens with “Trust It’s True.” This one is all about believing. When you start to feel that tinge of romance growing in your heart, don’t doubt or quench it, but let it bloom, this song’s lyric suggests. “Settle Up Settle Down” is one of the songs where Michel sings in a higher register on the track’s chorus. In contrast, “Peace Of The Moment” finds Michel vocalizing much more gruffly. This song’s words contrast two different approaches to living. One person prefers circumstances to be calm. In other words, he/she appreciates the “peace of the moment.” The other likes a little commotion. This personality comparison is performed over a funky groove. “Love Life Lies” finds Michel switching back to a falsetto vocal on the song’s chorus. This recording is also especially bass-y. The album closes with “For The Love Of It,” which sounds a little like a lo-fi Janet Jackson Rhythm Nation-era song. Once again, The Orange Goodness promote living a life saturated in love.

One is left with the impression The Orange Goodness sincerely enjoy creating music together. There isn’t one sad song in this batch. Yes, there may be conflict and differences of opinion, as “Peace Of The Moment” explains. However, the tone of this act’s lyrics suggest conflict is a wall true love can break down. Every time. Instrumentally, The Orange Goodness may remind you of another Minnesota artist that didn’t see a difference between dance music and great guitar music – Prince. Like Prince, these guys create guitar-oriented music that makes you want to move your feet.

On a more serious level, all of us in this pandemic age are flying just beneath the radar of chaos. One of the primary elements that can help get us through these difficult times, though, is wonderful music. Dance away that restlessness. Let movement be an act of resistance. No, The Orange Goodness isn’t political. Nevertheless, its music offers a great alternative to just sitting around and moping. So, get moving!