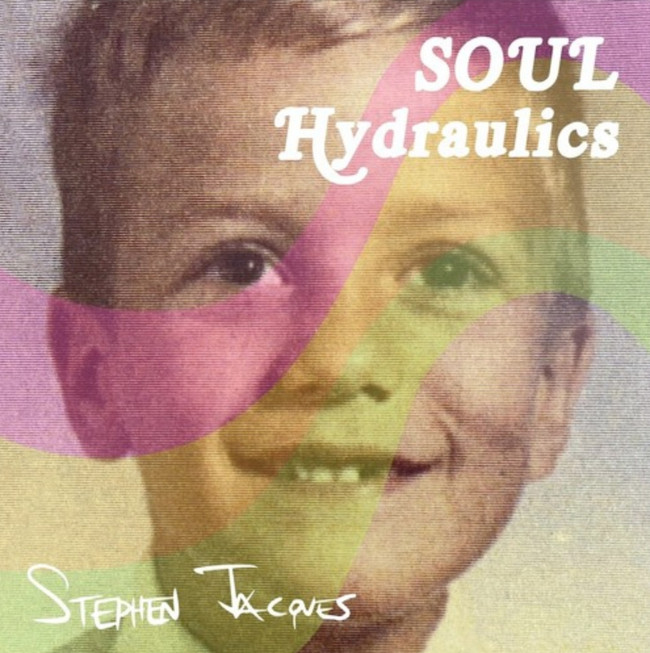 Stephen Jacques creates ragged, but sincere, rock & roll. Soul Hydraulics is an album comprised of meat and potatoes, guitar/bass/drum, rock music. No, it’s not particularly complicated music, but it is sung and played from the heart.

Many of these songs sound personal, even biographical at times. Such is the case with “Left L.A.” Los Angeles always seems to be a destination or a departure location. Either one can’t wait to get here or can’t leave here fast enough. Rarely, there is a middle ground about my hometown. Many of these songs, including “Left L.A.” and “James River Swim,” feature vocalist Terry DeSeta, as a sort of female vocal muse. She gives every track she appears on added aural coloring.

Some nice electric guitar work is the primary coloring on “Yellow Flowers,” which sounds a little like a French romantic movie put to music. It finds Jacques hearkening back to a particularly memorable romance. “Saucy Siobhan” is another song about a girl. Jacques is often inspired by the women in his life, just like most rockers. Many of these inclusions travel to an easygoing midtempo. “Jet Fighter,” however, is a beat exception, as it’s driven by a fast groove. It finds Jacques also singing about when his father returned from Vietnam.

One song that stands out from all the rest is “Golden Gate Crown.” This one begins with what sounds like a drum machine rhythm. Its music is not standard guitar, bass and drums, but more of an ‘80s synth arrangement, instead. While quite different from what precedes it, it’s also a nice aural change of pace, as it gives the project added variety.

It’s the literacy of Jacques lyrics that stand our most on this collection of songs. You might view these recordings as a sort of emotional travelogue. People that have had the greatest impact upon his life have ended up in his songs, it appears. Sure, some of these songs could be works of fiction. But I don’t think so. It all sounds too much like real memories, derived from real experiences. You feel the hurt of regret when he sings “Tidal Wave of Goodbyes,” for instance. We’ve all said our share of goodbyes, and Jacques is a lot like most of us.

One titled “Toll Booth Lady,” though, is on the unusual side. Yes, it’s also about a woman, only this girl works in a tollbooth. Jacques sings it over a swinging groove, accented by electric piano. While many of today’s toll both ‘operators’ have now been computerized, this song salutes a woman “Lookin’ down from her tollbooth tower,” as though she’s also a little snooty about her ‘high’ position. There have been many pop songs about many different types of girls, but this tollbooth woman tune might just be a first.

The album’s title track is a slow one, built around an acoustic guitar. It’s a little folky. It finds Jacques singing his regrets about a relationship that just didn’t work out right. Like many of the album’s other songs, Jacques peoples these lyrics with working class people.

Stephen Jacques may not always be the smoothest operator, vocally speaking, but there’s no questioning his honesty from the start to finish of Soul Hydraulics.