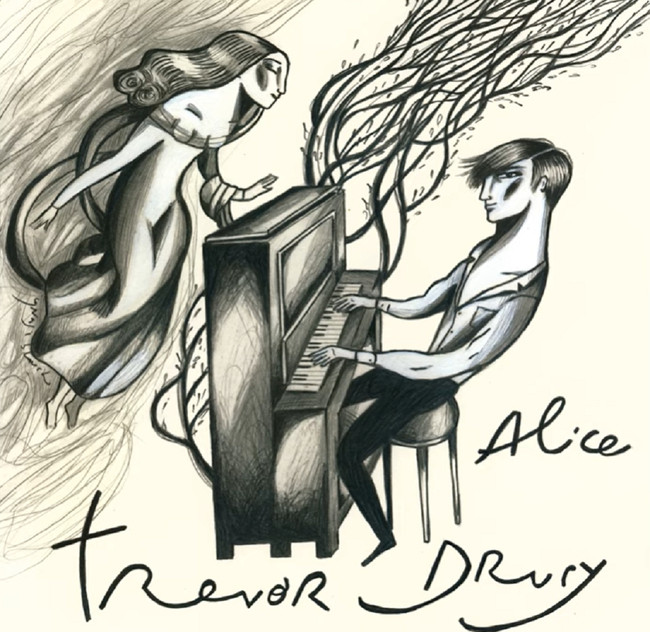 Trevor Drury has perfected art pop. The new song “Alice” is an ever-evolving train track cruising through splatters of pop and jazz ventricles. It’s not that Drury’s song is weird, it’s that it’s a quickly moving current flashing before our ears, with quick snippets of bells, driving riffs and robust strings. If ever there were a time in history for the mind to let go and drift away into the limitless imagination of a singer/songwriter that leans more into the Avant Garde than traditional pop, it would be in the year 2021. “Alice” might be a made up character or it might be the pressures of drug use – as a listener I’m not sure. All I know is that the sonic journey Drury leads is worth jumping on the moving train.

Drury, who is also a fashion model based in New York City, creates an eclectic music bed. The dissonance happening between the music bed and his tenor is modern and very Manhattan sounding. I think there’s an energy that feels very below the ground, subway like. His voice, much like Duran Duran Simon LeBon’s in “Girls On Film ” trails off into fun little caverns, only to quickly get pulled back into the fold. Take my mind, take my soul, Drury sings, as if he were a crooner. I truly don’t know if this song is about drug use, but there is an element of addiction that I kept returning to after each listen. I’m sure I’m wrong and it’s more about a relationship. It could even be about a stranger, with Drury cooking up some grand scenario of this woman named Alice that is on the verge of something mysterious.

What I love most about this song, besides the secrecy and the vagueness, is that Drury sings with sensitivity. I think he’s completely aware of the fragility in his voice, and that the music flowing beneath him has a wicked bounce. The music sounds like an amoeba. It’s fluid and it gains momentum because of Drury’s tones and vocal vibes. He has a throwback sound (New Wave meets Falco), but I think given a traditional pop song, he’d still knock it out the park. The haunting tones beneath his voice elevate that artistry and talent even more. In a sense, I think he becomes a character in this song too, and the story keeps unfolding with each listen. Drury keeps a lot of things close to his vest, but I do think in “Alice” he reveals a bit more to his personality. It’s there, you just must really keep listening and peel back the layers.

Walking away from this song, only to come back, makes it all sweeter. Drury allows the listener to breathe it all in, ingest it and then in some sort of surreal way, like a drug, you come back wanting more. If you’re a fan of the vintage sound from bands like Duran Duran, New Order and the eccentricities of Radiohead, then Drury’s “Alice” is a must listen. “Alice” is from the anticipated album, Alice It’s All In Your Head.