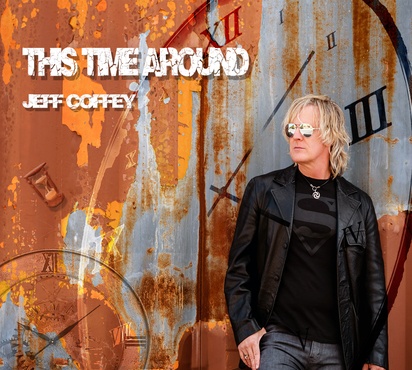 Where do you go as a musician after being part of a band that resides in the Rock & Roll Hall of Fame? It’s no secret that this is almost seen as a ceiling for some musicians, a lifetime achievement for others, but there’s no manual on the goings-on of a rock band career trajectory so the rules are understandably vague. For singer/songwriter Jeff Coffey, who spent time in the massively well-known and iconic band Chicago, he took some time to look inward. Releasing an album of cover songs under the title ORIGINS, he tackled the knack of inspiration head-on by working out what artists and songs made him want to pursue his career in music. The selflessness within this attempt to transparently deconstruct your career in front of your fans was a breath of fresh air from Coffey, and the inspiration seems to have worked as he has returned with his next fully original solo album merely a year later!

Released under the title This Time Around, Jeff Coffey is back and playing for keeps. The core concepts feel like a continuation of the influences explored within Origins, but the approach of This Time Around is one hundred percent personal. The title offers the atmosphere of temporary newness as if this is only a piece in the larger shape of Coffey’s discography at the end of the day, and this attitude permeates throughout the entire project — nothing about Coffey’s approach feels too self-serious, which works entirely as a benefit for This Time Around. Featuring a wide array of sounds and textures from the upbeat country-rock “Record Player” to the album’s call to action “Someday,” there’s no predictable pattern within the tracklisting. Listeners are given a front-row seat to Coffey’s experimental approach to crafting music, listening to the artist flex his strengths and weaknesses all the same, and without a modicum of shame.

The album as a whole doesn’t feel entirely like something meant to work as a legacy project for the musician behind it, and will surely give audiences the feeling that Jeff Coffey is only starting this next phase of his musical career. This Time Around functions both as a well-made and well-intentioned comeback album, serving as Coffey’s first solo album of original material in over a decade, as well as an earned victory lap from his time spent with Chicago. This Time Around is a resounding success as an album and as a reintroduction to Jeff Coffey, and the prospect of him re-entering the musical release cycle has never been as enticing as it is now; the inevitability of another album released under Coffey feels certain but the fact remains that his last solo release was in 2007, so nothing is guaranteed. That might be the overall takeaway from this outing that Coffey has invited listeners to join him on; This Time Around is something worth valuing now, in the present, and anything else will just be a cherry on top.