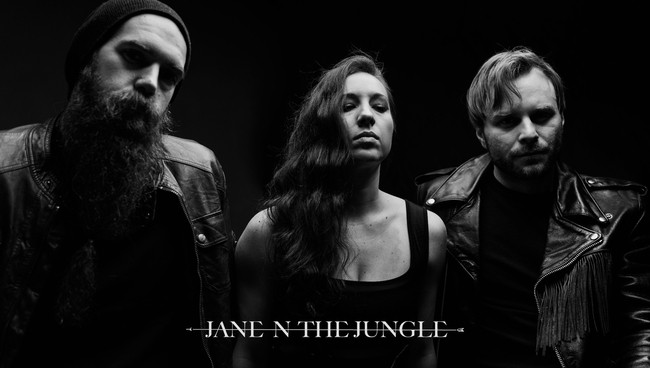 There’s a barbed wire tightrope that every heavy rock band has to balance upon: you can’t lean too far into melody and give up that venom, but you don’t want to tip over into a bludgeon-fest. Jane N’ The Jungle not only walk that highwire with their eyes closed, they set it ablaze behind them. Catchy punk chops, thunderous amps, and powerhouse vocals courtesy of Jordan White set them far above their peers. Their collision of timeless rock’ n’ roll, ’90s alt, and modern hard-rock call to mind chart-ruling gods from across the spectrum and across the decades, like Heart, Pat Benatar, and Soundgarden. With features on Spotify’s Fierce Femmes, All New Rock, and Women of Rock Spotify Radio playlists, with profiles in Alt Press, Women That Rock, Loud Women, The Hype Magazine, it’s pretty clear that Jane is about to become King of this jungle.

“Trouble” is a claws-out, killer rock waltz. Stop-start guitars and blistering leads set the stage for Jordan White’s super versatile voice, subdued one moment, lashing out the next as each part demands. With Brian Dellis on guitar and Bryan Dague on bass, “Trouble” is a life-threatening stomp, one giant cathartic hook. And it’s clear White had something pretty big to get off her chest. Here, she’s looking to leave her past behind, shouting down all the people and presumptions that keep rearing their heads. Like their previous singles “Animal” and “Lucky 7,” this was produced by Chuck Alkazian (Chris Cornell, Pop Evil, Tantric) at Detroit’s legendary Pearl Sound Studios (Filter, RHCP, Asking Alexandria). Listen up – the title track off the Angel Rock Records release Trouble is definitely the kind you want to get into.

Directed, shot, and edited by Jim Louvau and Tony Aguilera, the video for “Trouble” puts the band’s considerable charisma to work. The song was a group effort, co-written by all three, and this is a band, an us-against-them outfit; that all comes across in this performance clip. They plug in and rip in various industrial settings, where one wrong stage move might result in a tetanus shot. A story slowly emerges as White flees down the hall of a dimly lit warehouse. The surveillance feeds jump and cut out; we never see her pursuer, never learn why she’s running. True to the song, she’s making a desperate escape. Bad news: she gets caught and interrogated. A dark figure in a suit bangs his fist on the table – who does she think she is? Did she really think she could get away? Jane N’ The Jungle, “Trouble,” and everything this band is quickly accomplishing is all the answer you need, and it’s the only answer he’s getting out of her.