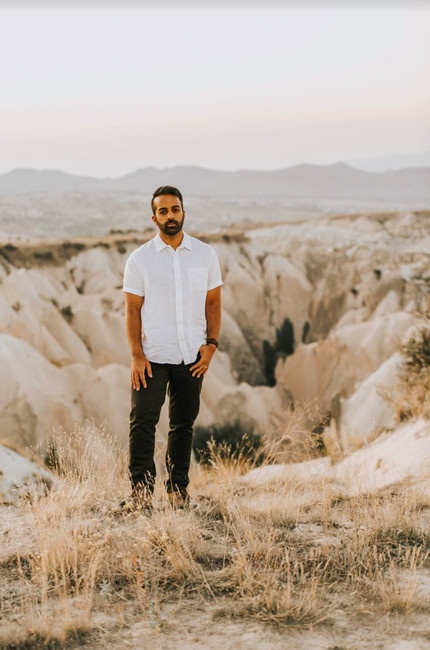 Koosh Saxena is riding the wave of passion. The singer, songwriter, and guitarist goes with the flow; from the seaside town of Capitola in Santa Cruz, CA, Saxena uses the ocean and beach to inspire him. His life is filled with art and leisure like surfing, yoga, and sitar. These natural creative pools flow into his work and evoke a career that encourages listeners to take risks, follow their dreams, and practice humility. Over the last decade and a half, Saxena has played in several bands, toured on numerous national tours, and was signed to Houseworks Records. Now, as a solo artist, Koosh blends jazz, reggae, and alternative rock alongside lyrics that illustrate organic self-examination.

In 2019, Koosh worked with producers Reto Peter and Ed Clare to release his debut EP, Sail With Me. His three-dimensional music blend immediately pulls every type of listener into his world. He entices them with his sound but retains them with his story. The title is two-fold; it’s a clear invitation for fans to join him on his journey. The journey shaped by “cant’s” and “don’ts” is now redefined as he goes along with no fear of failure allowed to get in the way.

Love is not as straightforward as many people hope for; there are many roadblocks, pitstops, and barriers that intervene along the way. Yet once you surpass all those trials and tribulations, you realize that all those obstacles were worth it in the long run. Koosh portrays his love story via video game form in the new music video “Trying My Best.” He wakes up on a foreign beach with one objective: save the beautiful girl from the bad guys. As he treks along, he finds a blindfolded non-player character who gives further clues to the quest. The protagonist fails to notice the warning sign and enters threatening territory where he’s kidnapped by bandits. Luckily for Koosh, he’s tied up with his damsel, and they escape together. A door in the middle of nowhere will supposedly lead them home, but as Koosh approaches the frame, his power bank depletes to zero. It makes us wonder, did the singer and his miss make it to the next level? Or will they have to restart the expedition?