“Overall, this is a hugely eclectic and wide ranging set of songs unified by the powerful artistic vision of Phil Mitchell. The album runs the gamut of human emotions, all expressed through a constantly evolving mixture of genres and styles. The mixture of male and female vocals only adds to the variety but, most importantly, there’s several songs here that are potentially huge hits and the album as a whole deserves to be a huge success.” – Alex Faulkner 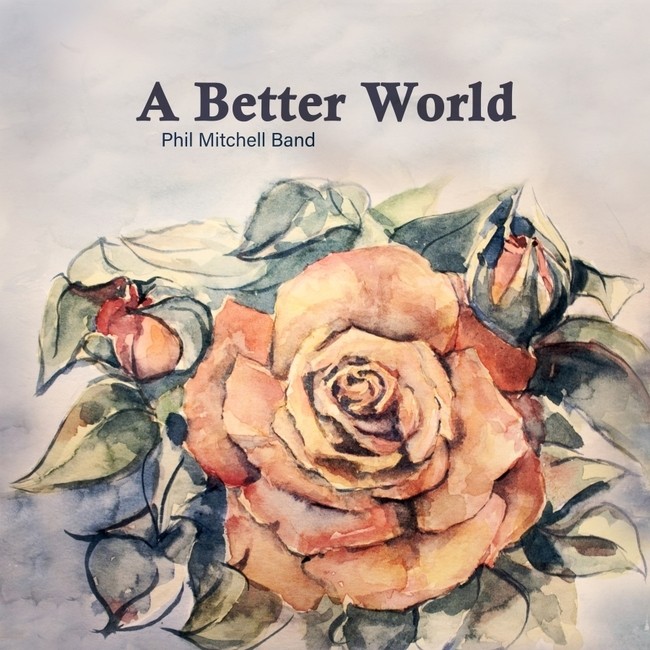 “With “Glory Train”, Chicago’s Phil Mitchell Band has showcased incredible musical range by taking you straight to the heartland. The song begins by creating a cinematic scene with the auditory elements of a train whistle and the sound of the rails as the train chugs away. It is a bright, uplifting track that showcases the band’s take on classic Americana with a distinct Woody Guthrie feel.” – Katrina Charles “A Better World has a very good timing in the sense that it was released in a time and a place where we have been drowned in negativity and sadness due to the pandemic. If there is a consistent theme and thread in this particular musical effort is the fact that there are very uplifting messages in the lyrics.” – Kevin Tanza

The Album “A Better World” consists of eleven tracks and begins with the hard rocking optimism of “Brand New Day”. The music immediately bursts out of a the blocks with fierce energy of a rising biting guitar with a creamy tone over strident drums and punchy bass. Listeners will recognize that “Brand New Day” is about a certain someone through the line “Every time I get that feeling I think of you,” followed by the repetition of the line “I think of you.” There are aspects of Bon Jovi to the sound but with a distinctive style of their own second track, “Never Let it Die”, is even better. It is a “lighters in the air,” euphoric rock anthem with an instantly memorable title hook. The song reflects on when the narrator and another person were both “young and free,” a lyric implying former liberation. Such happiness appears to be gone in the present day, as evidenced through lyrics such as “When I look into your eyes I see the loneliness,” and “When I look into your eyes I see the pain and sorrow.” Listeners will hear deep emotions when lyrics like these are sung, as if there is a hole in his heart. Through singing “We’ll never let it go/We’ll never let it pass/We’ll never let it die,” the narrator seemingly wants to hold onto the sparks of joy. This song adds the band’s past rock songs including “Come and Stay with Me” from the “Crossroads” album, which is gaining more radio play.

My Love Is True is an unexpected surprise, a female sung pop track. It brought to mind the Stevie Nicks songs of Fleetwood Mac, but also a soul/R&B influence which keeps it sounding modern. Musically, it’s a fantastic blend of tight, funky guitars and nicely overdriven Rhodes electric piano. Again, the catchy chorus is of the highest caliber and would make a great, radio friendly choice as a single. Then comes another gorgeous piece of songwriting, the title track. It’s a James Taylor/Simon and Garfunkel style acoustic ballad with an intimate and heartfelt lead male vocal, wonderfully counterpointed by female backing vocals. The arrangement gradually builds to a mid paced groove with some exotic instrumentation that gives real richness and variety to the sonic texture. The theme of the song is rather moving in an understated way, the title hook capturing this succinctly: “Just searching for a better world for you and I.” The song tells the story of why Phil became a songwriter following his life: from his time on the track team, his dad being a history teacher, and his time watching people while driving a trolley.

“All you can write, is what you see”, said Woody Guthrie. The pandemic reminds Phil of the dust bowl of the 30’s when many people were unemployed. He has worked with students at schools who didn’t always have the best things. “I just try to bring them a little joy”, Phil said. “God Bless this Child features some strong vocals of Natasha Shayenne with some similarities to “Bridge over Troubled Water”. Ninth track The World Is A Beautiful Place is a change of pace once more; a toe tapping funk pop track with Nile Rodgers-type slick guitar and some superb drumming. The second section has some adventurous chord changes that shows the deep harmonic knowledge behind the songwriting, yet it still works simply as just a very catchy pop track. Elena Ravelli does a nice job of commanding the vocals and reminds us that the world is what we make it all the time. The tenth song on the album is “Heavenly Waters.” It begins with a funky electric guitar, which is played slowly at the start. After the prolonged instrumental, male vocals arrive. There are negative lyrics, such as “When you feel life has no meaning/When you feel you have no dream.” However, positive lyrics like “Let the water flow” follow.

“A Better World” is not just the latest album from the Phil Mitchell Band, it is the culmination of years of experience, hard work, and novel inspiration that occurs once in a while in the rock genre. The album is a kaleidoscope of various genres, ranging from their usual rock style to pop, R&B, folk, dance, and a hint of country in some of the songs. However, the real masterpiece in the piece is the final track, sequestered at the very end of the album, and offering the best for last. “Love is True Symphony” is a one-of-a-kind song, especially from the band. The song is relaxing and lulling, performed by a small ensemble and symphonic in nature. It eases the listener back into the real world with its cheery sustained melodies and soft performance while crowning the amazing collection of “A Better World”.