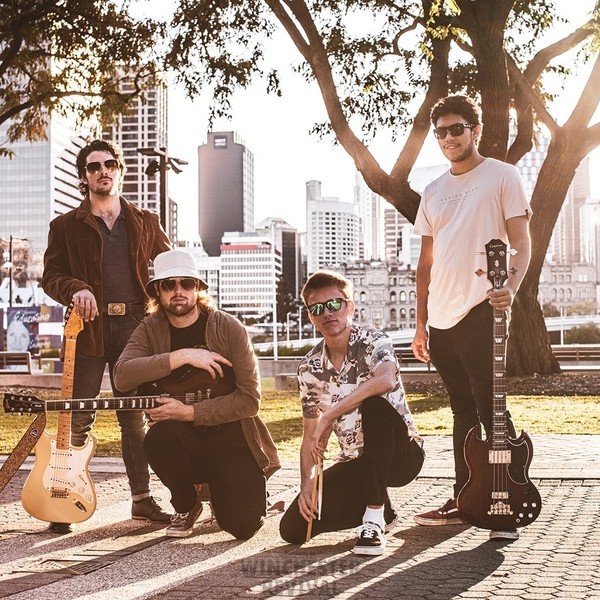 Rolling out of the darkness with a rollicking string groove that immediately invites memories of listening to Bad Company on a late summer afternoon, there’s undeniably a classic rock energy to the groove we first hear in the opening bars of Winchester Revival’s new single “Rock in My Soul.” Although steeped in a strain of Americana that lends itself to heartland rock more than it does anything in the alternative country lexicon as it stands contemporarily, “Rock in My Soul” is definitely a multilayered track from a compositional and aesthetical standpoint, but more importantly than this, it’s one of the more infectious and accessible I’ve listened to all October long.

Winchester Revival come from across the Pacific in Australia, but rather than focusing on the thunderous riffs many of their most legendary countrymen have when creating their own iconic sound, there’s an attention to even the littlest of details in this song that suggests a much more complex approach to musicality for the group. They’re putting as much of an emphasis on the searing stylization of the strings as they are the relationship the lead vocal develops with the instrumental melody, which isn’t something I can say for many other rock bands generating hype this fall.

There’s definitely not a lot of bassline-induced pressure in this mix, and yet everything on the backend of the track sounds and feels really suffocating, even when the chorus is cutting through the clouds with relative ease. The arrangement of the instrumentation in general is seriously generous to the singer, but whether we’re tuning in to the substance of the lyrics or focusing on the balance he’s striking between the crash of the percussion, sizzle of the guitar and cadence of his own verses, his is easily the most coordinated role in the whole of this band.

No one is leaning on anyone else for assistance in making their own mark on the narrative, but at the same time I can see where if even one of the moderate components of the harmony were adjusted or changed in any way, this single would lose a great deal of its sex appeal. It’s a stacked document that feels designed specifically with the western-minded rocker as the target audience, and if Winchester Revival can score some consistent airplay on the American side of the Pacific this season, I don’t see where their sound wouldn’t gain instant traction with volume-deprived headbangers throughout the States.

I just found out about Winchester Revival for the very first time this week, but with the momentum they’re building up in their native land and abroad this October, I would have to say they’re absolutely one of the more important bands in rock n’ roll that you need to be paying attention to at the moment. Australia has always been home to some of rock’s greatest mentalities and work ethics, and in 2020, it should perhaps come as no surprise that the continent is once again turning out some fierce noise in the form of a Winchester Revival band everyone should be cranking up at the moment.