Maybe you need to be from the Los Angeles area to get this joke, but Velodrone clarifies, “We are not cyclists, but a power trio ROCK BAND in Los Angeles, CA,” on the group’s Facebook page. They’re likely referring to the Olympic Velodrome (entirely different word) in Carson, CA where 1984 Summer Olympics bicycling events were held. This “power trio” consists of guitarist/vocalist Marisa Dewa, guitarist/bassist Danielle Caseñas and Zachary Berstein on drums. This is the group’s self-titled debut album. 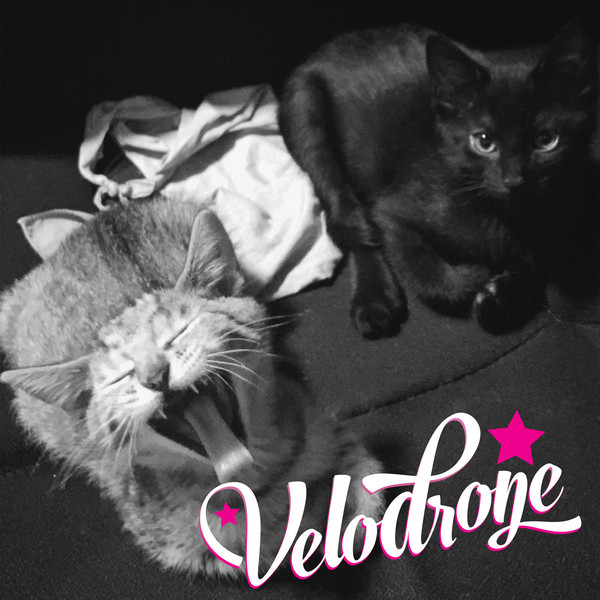 One can hear the overt influence of shoegaze on Velodrone’s sound, but when Dewa speak-counts during “Black Cat,” The Breeders also come to mind. Dewa sings with a touch of a bad attitude. She’s not at all the sugarcane in cellophane, sweety pie type, at all. A photograph of two cats appear on the album cover, and while the tabby-looking one appears to either be meowing or yawning extra big, the black cat only stares. One gets the impression this latter feline best represents the group’s overall attitude.

The group proudly proclaims how its music evokes the sounds and nostalgia of ‘90s alt/indie rock. It’s easy to pick up on these influences quickly, too. It’s sad to say, but guitar rock is so rarely heard on the radio these days, and you probably hear it more on classic rock and oldies stations, than you do on pop radio. Velodrone are out to prove that there is still plenty of creativity that can be mined from the minimal elements of guitar, bass, and drums.

While much of Dewa’s vocals are mainly sung with a snicker and a sneer, one slow and pretty one, titled with the optimistic “Believe,” finds the singer giving us a rare example of vocal prettiness. It’s not going to give Celine Dion a run for her money in this category, but it is a nice break from all the anger and pain expressed elsewhere. The group is mostly back to its same old tricks on the next track, “Sleepwalking,” which – at 4:58 – is the longest song on the album. It’s a sludgy Nirvana-esque grunge rocker. This track also includes a guitar solo. It’s not, though, any sort of Eddie Van Halen-like, multi-note solo. Instead, it is comprised of long, emotive notes.

The album closes with “WYSIWYG,” which begins with Dewa singing about someone she dreamed about last night. When she asks, “Who the hell do you think you are,” however, it begins to sound more like a nightmare than a dream. There is some nice, chime-y guitar work in places, which alternates with angry thump-y sounds. Opening song, “Love Race,” may be the act’s most shoegaze-y track. It is slow, with moody electric guitar chords. As you might have guessed already, though, shoegaze is far from the only arrow in this group’s eclectic quiver.

No, Velodrone is not a trio of bicyclists. Instead, its music suggests something along the lines of a leather-clad biker gang. This is the kind of music you should play loud out your window, just to annoy your hip-hop loving neighbors. There’s more to music than just beats and rhymes, ya know. Velodrone may be a rare breed, but its album is a rare beauty.