So much rock & roll is created for the sole purpose of meeting girls. Many of these songs are about girls, and even feature girls’ names in their titles. One might well postulate that there would be no rock & roll without girls. (There would be no human population without women giving birth either, but that’s a whole other matter altogether). Now, Steve Kilbey, front man for The Church, has released an album titled Eleven Women, and quite appropriately, many of these tracks are titled with female names. It’s 2020, and although much has changed, rock & roll – in many respects — has stayed the same. 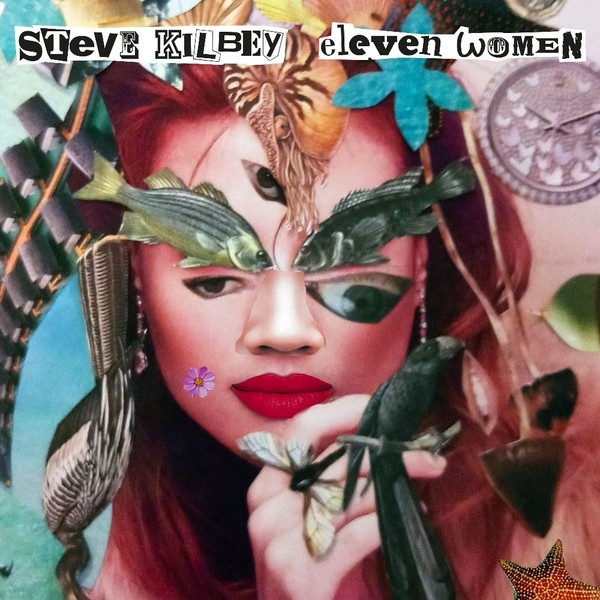 The Church began as a latter-day psychedelic act from Australia, which then grew and evolved well beyond those roots. Nevertheless, Kilbey – the solo artist – is not all too different from the band he fronts. The beautifully drone-y (in places) “Lillian in Cerulean Blue,” will remind listeners of Church (the band, not the place) music. This one is followed by one of the album’s most beat heavy tracks, “Queen of Spades.” It begins with a pounding drum pattern, which is followed by Kilbey’s familiarly ghostly lead vocal. The track also sports some wonderful jangling guitar, as well as acoustic piano. Acoustic piano appears often among these eleven tracks, whereas that instrument appears rarely on more guitar-y Church songs.

One called “Baby Poe” is the full-length’s sweetest track. In fact, it sounds like a song intended for a baby, with happy words and a jaunty rhythm. Kilbey most often sounds like one who is more apt to delve into the mystic, but here he comes off much more like a doting father (or grandfather?). It’s a rare move for Kilbey, but a welcome departure from what we’ve come to expect out of him. It’s followed by “Doris McAllister,” which couldn’t be more different. The latter includes a long, dark instrumental intro, followed by Kilbey’s slightly strained lead vocal. On it, guitars, drums and piano crash like waves against the shore. This woman’s name also sings so well, with its multiple syllables.

Near album’s end, “Where Gloria Meets Rachel” goes all psychedelic, with a feel not unlike what the Beatles sounded like after visiting India. It features Kilbey announcing, “Still got a long way to go.” The album closes with “Think of You (for Jessie Bellette),” which caps the album off with a lovely, folkish acoustic guitar ballad. It also features Kilbey’s best vocal on the project.

An album so female-focused may not have fit into The Church’s extensive catalogue. This is a tad indulgent, but in the best sense of that term. It’s Kilbey drawing character sketches of various women, and it’s filled with the same wide sonic variety as one finds in the fairer sex (if one can even use the term ‘fairer sex’ these days). Kilbey, with his various collaborations and this solo project, in addition to his regular contribution to The Church, seemingly doesn’t suffer from writer’s block. Church fans will eat this stuff up, but it’s a treat for anyone that appreciates obsessive creativity. To say, ‘This one’s for the girls,’ is pandering. However, this one is for the girls and about the girls, and yet, the canon of songs about girls is still not exhausted. It never will be, either.