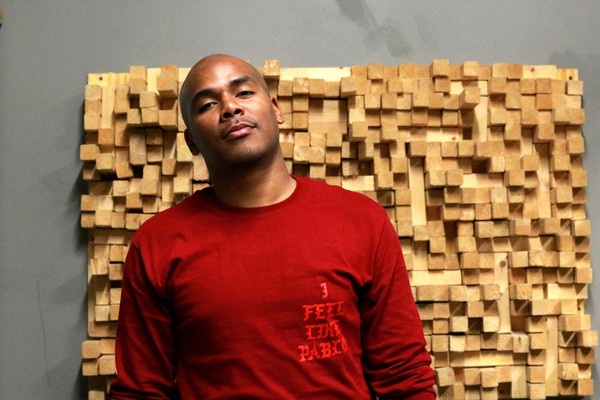 So what are you doing this afternoon? How about a joyride through Times Square with Malcolm Kay? We doubt you’d be able to find a livelier or more genial host. The Los Angeles-based rapper is a creature of pure exuberance – and he draws the listener into his colorful world so effortlessly that you won’t even feel the transformation of your surroundings. One minute, you’ll be at your desk, and the next, you’ll press play, and you’ll be cruising through the city streets at substantial speed.

All good albums have the power to transport their audience into another time and place. Malcolm Kay’s recordings are exceptionally good – and exceptionally immersive, too. All Black Masks, his latest set, is as much a short movie or documentary as it is a hip-hop project: it’s a glimpse into the rapper’s carnivalesque environment, illustrated here with detail and affection. It’s thrilling, it’s brash, it’s seductive, and, at times, it’s more than a little dangerous. More than anything, All Black Masks is a portrait of a life led at startling velocity. On track after track, Malcolm Kay practically dares you to hang on.

“What You Think” isn’t the kickoff track on All Black Masks, but it’s probably the best introduction possible to Malcolm Kay and his methods. Everything that’s made him such a vital addition to Southern California hip-hop is here: the effortless wordplay, the larger-than-life persona, the sheer confidence, and the firm hand with a rapped hook. The chorus seems certain to become a catchphrase; the verses are loaded with hip-hop quotables; the trap beat manages to simultaneously be menacing and celebratory; the breakdowns heighten a sense of drama that’s already palpable. Malcolm Kay’s voice is a unique instrument – once you hear it, and from the second his verse starts, you’ll always know it’s him – and the urgency and excitement that it communicates are impossible to fake.

MALKEEEZY’s clip for “What You Think” is just as irrepressible as Malcolm Kay’s vocal is. The rapper has plenty to show off, and he’s not going to rest until he’s confident he’s been seen. He doesn’t want you to miss his gold, his stylish apartment, his white Mercedes SUV or his Balenciaga hoodie, certainly, but more than that, he’d like you to admire the poise he shows when he rides the beat. He’s asking your opinion – what do you think? – but it’s a rhetorical question. He’s already pretty sure he knows.