For many young listeners, the song “In the Dark” will strike them as a great new song. But for the older among us, this Billy Squier tune will provide a wonderfully welcome jolt of familiarity and happy nostalgia. This was a single taken from Squier’s album Don’t Say Now, the same album that gave us “The Stroke.” “In the Dark” wasn’t as big of a hit as his single “The Stroke,” but it still rose to number 35 on the Billboard Hot 100 chart, as well as making it to number 7 on Billboard’s Hot Mainstream Rock Tracks. The Village Voice even listed it at number six on the 20 Best Arena Rock Songs of All Time. And yet, if you don’t listen to classic rock radio, or you’re not aged enough to remember this 1981 gem, you might not even know this fine song exists. 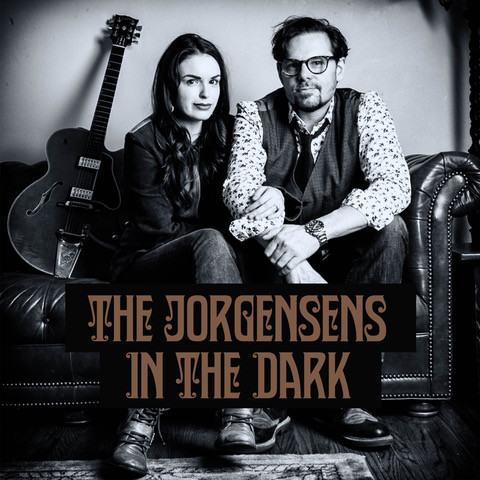 It’s easy to just paint oldies rock with a broad brush and call it mostly disposable music, but Squier was a rocker who wrote songs with more depth than most others did. This makes it a choice song for The Jorgensens to cover. Of course, this mostly acoustic act has tamped down the sonic on it considerably. It begins with mainly acoustic guitar and vocal. Also, unlike Squier’s original, this version is sung as a male/female duet, rather than Squier’s singular vocal. Whereas this original song featured the guy making a proposal, this new take incorporates a male and a female discussing a proposition together.

The song’s lyric is a mature consideration of partnering. “Do you need a friend, would you tell no lies/Would you take me in, are you lonely in the dark” its chorus asks. Darkness signifies fear of the unknown in little children. Young children may not want to go to bed at night because they’re afraid of what might be lurking in the dark – especially under their bed. For adults, though, when darkness falls, loneliness oftentimes creeps in. They’re not afraid of what they cannot see; they’re afraid that they won’t see another person (hopefully, a lover) that will scare away all their loneliness.

What’s also notable, is how Squier’s song never once mentions the word ‘love.’ Therefore, this is not exactly a love song. No, this is a song about the desperate need for companionship. Heck, it’s not even a song about sex. Sure, sexual intercourse most often takes place when the lights are out. Not here, though, there is something far deeper emotionally going on. Squier was singing about making a connection with another human being. Sure, sex and maybe romantic love may follow, but these are secondary concerns right now.

The Jorgensens’ arrangement of the song also adds an orchestrated part, which gives it a touch of an “Eleanor Rigby” vibe. Just as dying alone is tragic, Squier’s lyric reminds us, “Life isn’t easy from the singular side.” No, the darkness seems even darker when we’re alone.

The Jorgensens are to be saluted for remembering and reimagining this excellent song. Let’s hope it’s heard by a new generation of music fans because it’s just too good to be forgotten.