So, have you ever pondered how to best write a love song to a stripper? I know, it’s probably not the kind of song you’d immediately gravitate towards during family karaoke night, because it’s not a subject usually discussed in polite company. Sure, you could apply the usual compliments paid to pretty girls, such as how pretty their eyes are and the lusciousness of their hair. However, this type of song requires praise of a far different variety. This is a song about a girl that applies natural beauty while pole dancing, which is – once again – not always talked about around the dinner table. Don’t worry about working up that special song, though, because Amir Beats, a producer, artist and DJ from Houston, TX, has already beaten you to the punch. 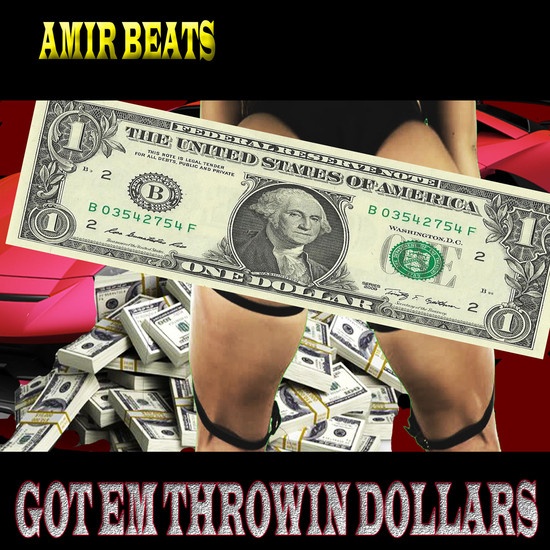 Beats’ track is titled “Got Em Throwin Dollars,” which is a phrase alone that sums up this song’s nudie complimentary tone. If you’ve been to a strip club, or watched many hip-hop music videos, which are oftentimes R-rated strip club recreations, you well know that patrons throw dollar bills onto the stage whenever they think a particular dancer is especially good looking. If you pulled such a stunt out on the city street, you might get slapped in the face by a girl, or worse yet, beaten up by that girl’s boyfriend. However, what is completely out of place outside the four walls of an adult club, is perfectly acceptable within.

Over a sparse groove, Amir Beats has done all the dirty work, so to speak, for us. Backed by little more than drum machine percussion and bleep-y sounding keyboards, Beats gives us a little smattering of street poetry with “Got Em Thowin Dollars.” This girl’s “got ‘em thrown’ dollars out,” Beats announces from the outset. Therefore, we know right away that she’s a club favorite. In fact, the single’s artwork features a (clothed) dancer standing over stacks and stacks of dollar bills. Obviously, it’s been a good night. Beats tells us how we can look, but not touch, with this girl. “You cannot take her home,” he reminds any patron that might get any ideas about a future relationship with the girl. He also compliments this dancer on her “big ass and titties.” Although the song probably repeats its chorus a little too often, it does include some verse lines that are memorable. At one point, Beats reminds us how she’s taking a lot of guys’ money. Once again, if you think for even one second that this girl’s in it for love of any kind, well, you’ve got another thing coming. Nevertheless, Beats notes, “You look like you could be a rapper’s wife.” This observation is notable because she probably won’t make a good wife for nearly any other type of occupation. Rappers help keep adult clubs in business and are – in addition to being musicians – are likely the greatest experts on strip clubs.

Perhaps the best compliment anyone could pay Amir Beats for this song, would be to play it in an actual adult club while a girl is dancing. Maybe its suggestion of heaping dollars on the stage is a little too obvious. Nevertheless, it is what it is, and at least one pretty girl now has her own song.