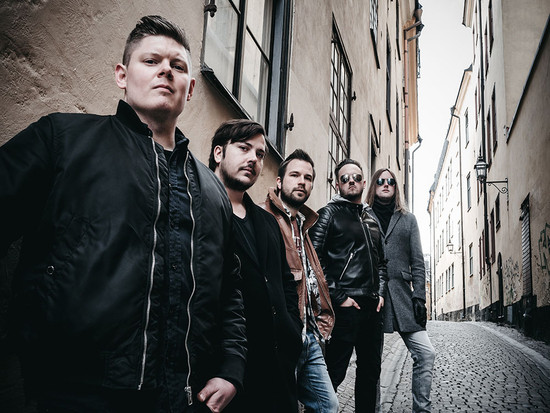 It’s been a long road for Stockholm’s Tainted Black, from raw lyrics scrawled on a Post-It nearly a decade ago to their debut album, released in the summer of last year. Most musicians will tell you their careers began when they heard a particularly powerful song on the radio, or followed a family tradition of making music. Not Alexander Karlsson: reeling from loss and surrounded by death, he started his journey as someone with something to say, and he had to find a way to say it. Member by member, Tainted Black took form over the years as Karlsson dedicated himself to the drums. Lead guitarist Johan Hörnqvist, rhythm guitarist Johan Ohlson, bassist Tobias Giertz and vocalist Jesper Hember all took stabs at rounding out the band, and each slotted perfectly into place. Gaining momentum with dozens of live shows, including a successful run at Emergenza Fest, but with no recording budget, the band taught themselves how to make an entire album in their practice space. “Nirvana” is the second single and first video from that self-titled record.

“Nirvana” is a driving slow-burn of straight-up rock, with the kind of steel-plated guitar crunch and low-end bombast that no doubt makes it a crowd favorite at shows. The track is heavy on rhythmic and sonic muscle, but its real strength lies in the vulnerability of Hember’s lyrics. He’s a graduate of the school of Vedder and early Weiland, able to command attention whether he’s delivering a contemplative, throaty verse, or going for broke on the giant, growling choruses. For a debut album, the band has a rare grasp of how to inject energy into melancholy. The optimistic urgency of their DIY recording sessions certainly bled into and fueled their playing, and from Hörnqvist’s shredding to Karlsson’s rock-solid groove, the band belts it out with the passion of an outfit with everything on the line.

The guys wisely shot the performance video for “Nirvana” in the same room that they wrote, rehearsed, perfected, and recorded the album. It’s a haven from the song’s whirlwind of emotion and injury, allowing them to rock it out with focus and determination. Filmed in stark black and white, they take up their positions in the practice space à la Metallica’s “One,” and blast through the nearly 6-minute track. Director Sebastian Forssman cuts between scenes of vocalist Jesper Hember acting out on the song’s angst and confusion, whiskey in one hand, a sledgehammer in another. Black roses, Joker cards tumbling end over end, and shattered mirrors only hint at the story that has led the narrator of “Nirvana” to cry out for the ultimate release from pain.