Crafty’s single, “Wonder Why,” is taken from the appropriately titled One Sugar EP. Appropriate, because this is such a sweet song, with sweet being a primary component in bubblegum rock. Kicking off with a touch of beautifully bitter guitar feedback, the song’s sugar rush than quickly kicks in, intensely. Next up is an aggressive, power-pop electric guitar riff that sets the song in motion. 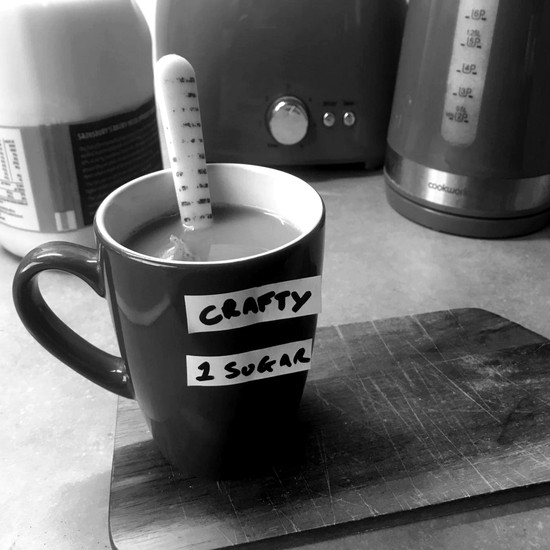 This track’s vocal may remind you of Cheap Trick’s Robin Zander, with its melodic, singing purity. Even the group’s name, Crafty, is a little bit sly — like Cheap Trick. There’s the impression this name is a bit tongue-in-cheek, as though these musicians know something we don’t know, and they’re not telling. Crafty, like that.

The song begins with the line, “I can’t stand still today.” So, from the very get-go, these words match the beat of the music. This is, in its simplest form, a song expressing restlessness. It’s a battle with questioning that is causing restless edginess. Nobody likes those ‘why’ questions. As they used to say on the old Dragnet show, “Just give me the facts, ma’am.” Don’t fill me with a whole lot of speculation about motives and inspirations – although, of course, motives are also essential to crime fighting. There’s a place for ‘why’ questions in any investigation, but usually only have the who, what, when and where queries have first been resolved. “I just want to stop and turn back the time,” the singer tells us later. This part suggests something’s happened, and likely happened too fast, and now this guy wants to get back to the way he/they were before the incident. Perhaps, these are post-breakup questions. It’s as if he wants to rewind the clock and have a do-over so he can watch events unfold a little more closely. After all, it’s not unusual for us guys to fail at paying attention. Like children, we men can be distracted easily.

These song lyrics also suggest how this whole relationship disruption has caused insomnia. He sings about tossing and turning while wondering why. Nighttime is one of the worst times to deal with lingering questions. If you’re up in the middle of the night, mulling over what’s been happening, you don’t usually have the luxury of just calling somebody and hashing it all out. During daylight hours, we can sometimes get our immediate questions answered and ease our minds. Not so, with this poor soul, though. He’s likely in bed replaying previous events over and over again in his mind, like he’s re-watching the Zapruder film. (The Zapruder film is that silent 8mm film of the John F. Kennedy assassination shot by a guy named Abraham Zapruder).

This track clocks in at just over three-minutes. There’s still time for a fine psychedelic-sounding electric guitar solo, which brings vintage Jefferson Airplane to mind. The guy singing it obviously wants this relationship to work. He’s urgently seeking out reconciliation. One can hear traces of 80s New Wave rock, as well as British Invasion rock, running through this song’s sonic. It’s straightforward and uncomplicated. It gets right to the point, and then nicely drives that point home. You won’t wonder why you love it, at all.