C-Rod speaks truth to power on the fiery “Make Hip Hop Great Again!”. A critique of culture and politics emerges through the pointed lyricism. Mastery of his flow means that he goes for a highly intricate series of vignettes, ones that focus upon the toxicity of the world alongside personal moments. By building the two together, C-Rod creates a world that feels fully lived. Samples run through the whole of the album, helping to lend the tracks a certain level of tenderness. The whole journey has a poignancy to it, incorporating basically what it means to be an American aware of the injustice going on in America. 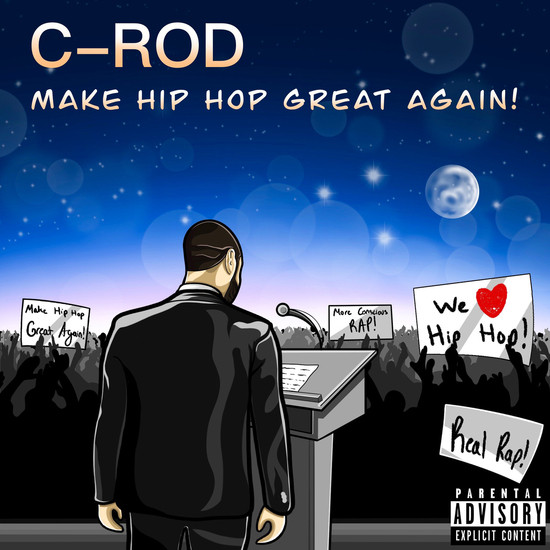 Lyricism opts for a certain degree of playfulness. This, alongside the overall selection of melodies and grooves, gives the album a nimbleness reminiscent of Madvillain’s kaleidoscopic imagery. Beyond this, the political kick alongside the cultural commentary at times touches upon Kendrick Lamar’s elements. Over the course of the album he manages to bring together both old school as well as new school hip hop influences. Highly articulate and intricate the way the album unfolds reveals whole other universes, paths the United States could have chosen but didn’t, and many more different paths.

A light jazz and crowd noise introduce the album with “The Speech”. Darkened imagery dominates the bleakness of “Reality TV”. Focusing upon the need to make politics entertaining resulted in the soulless void that defines the world. Funk rolls through on the reflective “Photo Book”. Tension builds up on “The System Is Corrupt” for the unease reigns supreme, as it focuses upon the inherent power struggle that defines America. Creaky AOL sets the tone on the tenderness of “You Got Mail” where the sample fits perfectly alongside the warped dial-up sound. Using Todd Rundgren’s “Hello It’s Me” to great effect “Cut You Off” has a tremendous amount of energy. Broken beats trudge through on the clear-eyed intensity of “Friends”. Claustrophobic to its core is the unease of “The Trap (All Night)”.

“Make Hip Hop Great Again!” goes for a visceral feeling, one that speaks right to the heart, and proving C-Rod to be a true master of his craft.