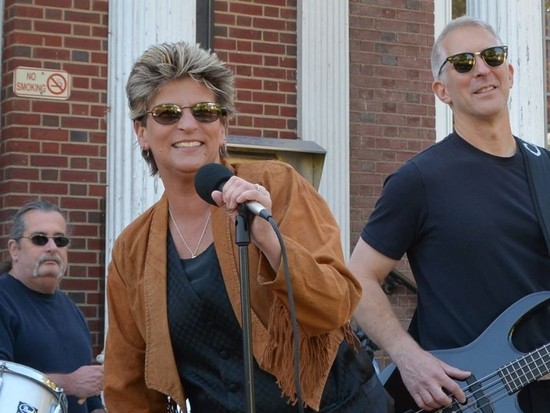 Where do you begin when describing JoAnn Barton? She has done it all from singing, performing and now a legit radio host. She was born in Newark, NJ, and was raised in Harrison, NJ where her heart will always reside and is a very popular face around town. In the early 80’s she performed at many clubs in the New York music scene. She eventually signed with the indie label MVP Music in Jersey which took her on a different road musically. JoAnn was influenced with many styles of music from Presley to Ozzy.

“There was always so much of a variety of music available to me growing up. Elvis was a major part of my life, so he is one for sure but I was intrigued with Michael Jackson’s dedication to entertaining his audience and the fabulous ladies of the 60’s groups.”

As a singer / songwriter she’s filled many notebooks with enough lyrics for several albums. JoAnn would eventually release an album titled “Pop & Circumstances” that would fare well on the market. In addition, she’s had a number of her tracks featured in a few B movies and also has 4 movie soundtracks to her credit. Yet she not only worked on music she even played a role in the film “Dear Diary” (2000) and wrote it.

When it came to performing at different venues what stood out more for her most wasn’t the club but the town. For instance she cherished performing at locations like Plymouth, Pennsylvania and her hometown of Harrison, NJ. JoAnn realizes that the music scene she grew up in and that many have during the 70’s and 80’s has changed dramatically. She admitted that today’s artists will never have the longevity and popularity in 30 years like the groups from 30 years ago. We remember their names, their songs, the band members and so on. Today’s music scene doesn’t even have band members, no names to recall there. JoAnn performed with many cover bands like Tantrum, Reasons and Flashback for about ten years. But she also performed under her own name as well with her original music.

JoAnn did leave the music scene after illnesses from 9/11 and to focus on her family life. Yet the music bug was tugging at her. She would re-enter the scene in a different way than she expected. JoAnn decided to start a radio show that focuses on exposing new talent as well as honoring past legends of all types of music and the entertainment industry. Hence, she founded Applause Radio Show with co-host John Orrichio which is presented by Magic Music Entertainment. JoAnn has actually been affiliated with MME for many years during her musical journey. Only recently did she win an award for Best in Clifton 2019 for her show. She has won many awards over the years but this one was special to her.

“Magical Music has been with me for 30 plus years. I would never imagine it or I would receive an award for it. It has always been one of the driving forces behind my music career. It is a/my music label, a management company for talented musicians/singers and also a subsidiary, MME Innovative Creations for my new products/inventions. And now it is the backbone to Applause Radio Show. Magical Music has been with me since day one and has seen the ups and downs, rejections, excitement and good and bad times. I’m so proud and happy to see where it has taken me and where it continues to go.”

JoAnn still contributes to the music scene as a songwriter and is a music critic for several online publications and recently recorded a track called “Be Kind” which she almost shelved until she saw a post on Facebook entitled NATIONAL BE KIND DAY. She in turn posted her song on the page and it blew up as many reacted to it for its universal message. It actually became a theme song for her local childhood school, Hamilton School. The principal Kevin Stahl and school rep Paula Reyes contacted her to use the song as the theme and JoAnn was more than supportive of it.

On her show she has had many interesting guests like The OUTSIDERS, Iron Butterfly, The Archie’s, The Drifters, Earth Wind and Fire, The Earl’s, Nina Blackwood and actors Lydia Cornell from “Too Close for COMFORT”, Artie Pasquale from the “SOPRANOS” and many more. Only recently she was asked to join an exclusive group called “Pop Jocks” that is dedicated to celebrating the marquee Dee Jay’s throughout the US. JoAnn is an all-around musician who will never cease to have music at the center of her life.

You can hear Jo-Ann on Applause Radio Show at http://www.applauseradioshow.com. It airs live on Wednesday and Sunday evening, but past shows are available at the site at all times. Your favorite musician/celebrity is sure to be on the show in the very near future.