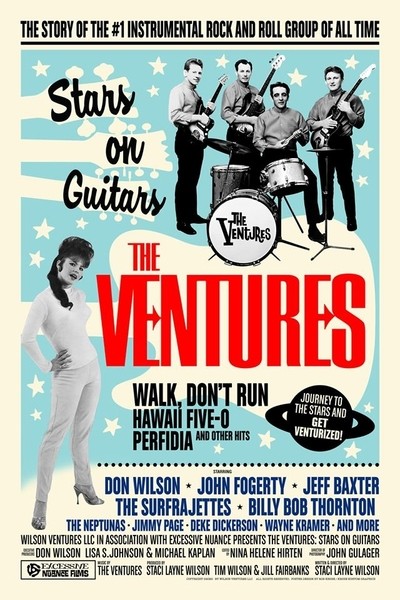 It’s hard to try and describe the effect this group has had on music for over 60 years, but Don Wilson’s writer/producer/director daughter Staci Layne Wilson has done a great job of successfully pulling it all together. In 1959 Don Wilson met Bob Bogle while working at his dad’s used car lot. After Bob convinced Don to become a bricklayer like him, the two soon decided to buy guitars to figure out a way to make money chord by chord rather than brick by brick. Don’s mother became their manager and even started their own record company. Various incarnations of The Ventures lineup have been touring ever since.

This movie explores and explains this instrumental bands beginnings through present, and has excellent commentary by some of the industry’s top musicians, about how they were inspired by these guys to play an instrument. Commonly referred to as “The band that launched 10,000 bands”, The Ventures studied various methods of playing and combined them with creating innovative technology to achieve previously unheard sounds. No group has (or probably ever will) influence as many new or professional musicians. The Beatles (who they also influenced) are in that conversation, but strangely enough, The Ventures records outsold The Beatles in the 60’s in Japan two-to-one. Their original 60’s sound was eventually termed “Surf Rock”. The resurrection and resurgence of their music inspired both punk and new-wave music (they even played at CBGB). To further qualify their importance and appreciative fans, just check out their various You-Tube hits.

In watching this film, you’ll learn and appreciate how this group has covered just about every music genre through 250 albums, 31 of them live. Some of the fun but true facts include multiple guitar companies that issued signature Ventures models, and that they appeared on movie soundtracks (notably Pulp Fiction) and TV soundtracks (notably Hawaii 5-0), wrote over 1,000 songs and recorded over 3,000 songs. They set another precedent of always being friendly and gracious to their worldwide fan base. I’ve been honored and fortunate enough to get to know these amazing guys, and also to do my part to help get them finally inducted into the Rock and Roll Hall of Fame in 2008. NOTE: Don Wilson will be recieving the TEC Lifetime Achievement Award at the winter NAMM show.