The Hardest Part, the new extended play from Oliver James, opens with its title-bearing composition, and through a mist of strings that create our foray into the track, we get a taste of the magic in store for us in the next 20 minutes of play. James’ lyric finds its way to the forefront of the mix with an airiness that meshes with the haunting, atmospheric tone of the instrumentation perfectly, and although there is no percussion at the beginning of the song, it doesn’t take very long for us to synchronize with the implied rhythm of the melody as it slowly unfurls. In The Hardest Part, Oliver James doesn’t try to redesign his artistic persona, nor that of his band, but instead greets loyal fans with a more experimental edge that was only teased in past offerings bearing this moniker. 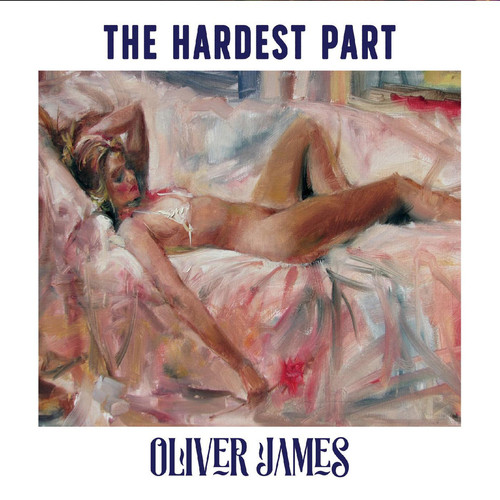 “Still Holding My Breath” is almost seven minutes long, but thanks to its consistently gripping groove and thoroughly evocative harmonies, it doesn’t feel like a bloated jam session at all. Truth be told, this track is actually one of the more fluid on the record; in three movements, it evolves into a cinematic string opus that is even more imaginistic than the six minutes that preceded it are. It’s difficult to make a song as stacked as this one interesting after only one or two listens, but I feel like I discovered more within the composition’s own picture with each sit-down I spent with it. Enigmatic might not be the right word to describe this track; it’s definitely as multidimensional as a riddle, but James isn’t indulging in a lot of metaphorical nonsense here, either.

“Wait for Me” is a little plain and simple in comparison to “Still Holding My Breath,” but to be fair, what wouldn’t be? James straddles a very gentle rhythm in this track with ease, stealing away some attention from his instrumentation for a shot at breaking off the most seductive vocal of the EP, and his valiant effort winds up producing some beautiful results. We come to the conclusion of The Hardest Part with another trip down the rabbit hole in “A Different Kind of Pain,” but even as this track’s vortex of piano, guitar and trench-like bass grooves smother us in their twisted melodicism, the effect of the past three songs isn’t minimized in the least.

From start to finish, it is very difficult to put down Oliver James’ The Hardest Part once it has been picked up for the first time, partially because of the fantastic musicianship of its eponymous star, but mostly because of the fabulous chemistry he shares with his band, and more prominently, the material that they’ve constructed out of this highly experimental groundwork. James himself is definitely the main attraction in The Hardest Part, but if it’s boundless psychedelic folk-rock that refuses to fit inside any category other than a broad “alternative” you’ve been after this year, I would rank this as among the top picks to go with. It would be really interesting to hear how a lot of this music translates live, but until I have the chance to find out on my own, the surrealism of this latest recording will have to suffice.