It’s been thirty-nine years since the launch of MTV. The first batch of Rubik’s Cubes were released in America four decades ago. Yes, the 1980s were a long time ago. But the Day-Glo decade continues to cast a long shadow over contemporary music: arguably, all of the biggest hits of the past few years have drawn inspiration and borrowed sounds from the new wave, post-punk, and radio-friendly hard rock. Arguably, the ’80s was the last pop era that wasn’t dominated by nostalgia: it had its own sound, its own style, and its own attitude. Little wonder, then, that those years are still very much with us. 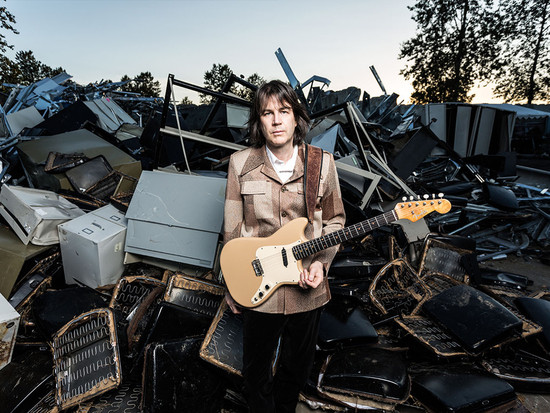 Pennan Brae certainly remembers. The latest single and video by the Vancouver, BC singer, songwriter, guitarist, and filmmaker is a playful, propulsive, and frequently hilarious tribute to the decade. He pokes fun at the excesses of the era and exaggerates its indulgences for comic effect. Still, it’s also clear that Pennan Brae truly loves the ’80s, and understands what made them such a vivid time for everybody who experienced that fevered, neon-lit time.

And “Strut 1980s” isn’t merely a simulation of a time gone by. Yes, he’s got access to film equipment and musical instruments (listen to those classic synth stabs) that’ll pull you back in time like taffy. With the help of producers Kirk Kelsey & Grammy nominated-Eric Alexandrakis, the trio created a time portal to the decade & achieve the sound Pennan was looking for. The song was then mastered by Grammy-winning engineer Sean Magee (The Beatles Remasters, Tina Turner) at the legendary Abbey Road Studios in London.

The album (Gravity – The Astronot) enlisted help from a few talented accomplices who know more than a little about ’80s sound. Drummer Steve Ferrone has hit the skins for Tom Petty & The Heartbreakers, Duran Duran, and Eric Clapton, and bassist Garry Gary Beers was a co-founder and thirty-five-year member of INXS. When they lock into a groove, they do so with the authority of guys who helped write the rulebook on ’80s pop rhythm.

Just like the ’80s artists who first took advantage of music videos, Pennan Brae understands the expressive power of film. He’s a screenwriter & filmmaker as well as a songsmith, with 2 feature films produced in the past 2 years. The Astronot (2018), & 2 Below 0 (2019), have received accolades from over 100 film festivals on the 2018/19 film festival circuit. Pennan Brae developed the script, composed the soundtrack and acted in the films while director Tim Cash brought that vision to the big screen. Cash is back in the director’s chair for “Strut 1980s,” and he’s shot the works – he’s decorated the clip in Day-Glo, filling it with props, costumes, and characters reminiscent of the glory days of MTV. Pennan Brae gets into the spirit, too: he’s totally convincing as an ’80s rock star. It’s a bold introduction to an imaginative artist with an impeccable sense of pop and rock history – and a wonderful sense of fun, too.