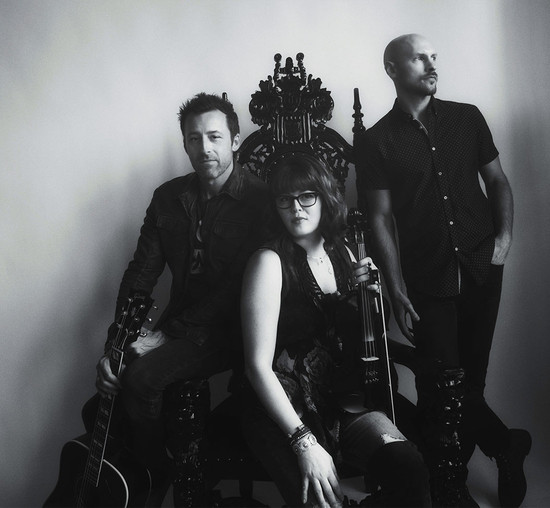 You can do the things the way they’ve always been done, or you can take a chance – a real chance – and do something entirely new. New Jersey’s Owls & Lions are steeped in classic Americana folk, lush harmonies, strings, and all. While they’re certainly carving out their own place with their original pastoral, celebratory indie-folk, it’s how they’ve connected with audiences that sets them apart. Instead of barrooms and rock clubs, the trio have focused on performing at weddings, festivals, theaters, and house concerts, which also benefit their 501c3 charity Ukulele Kids Club (www.theukc.org). There, they make an intimate connection with their audiences that most artists will never experience, or even aspire to – and their calendar is full. Guitarist/vocalist Jay Della Valle, violinist/vocalist Nicole DeLoi, and drummer Kevin Walters coax euphoric highs and moments of quiet reflection from their instruments. They make the kind of music you don’t just listen to; you get lost in it. They’ve skipped the empty venue drudgery, focused on the songwriting, and jumped right in front of captivated crowds every time they play out.

Many bands write love songs, but Owls & Lions are showing a unique take with their latest single “Take The High Road.” Sonically, “Take The High Road” is a timeless track, but the conversation it chronicles sets it firmly in 2019. Tensions everywhere are high, and sometimes we take them home. It’s too easy to lash out, attack, or take for granted the one you love most. Over swelling guitar, strings, and organ, upon a looping beat, Della Valle pleads with his partner to hit the brakes on the fight they’re stuck in, to take a breath, to let the flames die down. This is a difficult, genuine, unexplored look at what it really means to be in love and work through struggles to higher plains. Fortunately, Owls & Lions walk this tricky territory with surefooted, perfectly executed vocals and accompaniment. The There’s A Light EP was produced at Daxxit Sound Studios by Hanan Rubinstein, who’s known for his work with a ton of big names like Alicia Keys, Rita Ora, and J.Cole. It’s got some Head and the Heart, Imagine Dragons, Hozier, and even OneRepublic in there. Medium called There’s A Light’s last single, “God Bless You & Protect You,” a “sonic confection of pure elegance.” The same applies here, even when putting words to such a messy take on “the real” in modern relationships.

In illustrator/animator Nathan Morrow’s simple, line-drawn narrative, a couple walks a wilderness that’s vast, beautiful, and serene. The path they walk is at first clear, free of obstacles. It’s the early, so called “honeymoon phase” in any romance. Day slowly turns to night, the trail gets steep, clouds blot out any light. The couple’s demeanors reflect this increasingly tricky terrain as the path forks and conflict presents itself from different personal perspectives. The night passes through a stalemate, the clouds dissipate symbolically as they choose love and harmony over dissension and ego. The path to a higher ground on their journey merges their conflicting perspectives into one resolution and with a puff of smoke, the animator sketches a very literal “high road” in front of them- a “breakthrough” represented by a visually captivating “stairway to ascension.” Once we let the anger, hurt, and frustration subside, it’s so obvious. It’s a reminder we all need, as often as possible. As Della Valle and DeLoi sing over the mulit-layered gang vocals of the chorus, “Take the High Road, Take it where you want to go!” – there is a sense of relief, the feeling is hopeful and the view from the top is breathtaking.