“Winner of the Losin Game” has one of those ringing electric guitar backings that just gets stuck in your head. It’s a rock song that starts quick, without too much of an initial buildup. The guitar groove is also a lot like one of those fine old Gin Blossoms songs, which is always a winning formula. 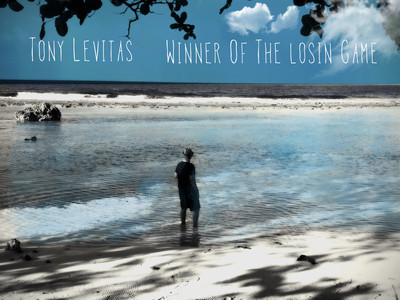 The lyric begins with Levitas singing about how this couple used to stay up all night drinking together, where he would tell this other person his dreams. During the partying, this other person tried to tell him what his dreams meant. But now, he hears tell that this former partner drinks all alone with a hollow heart. Although this is a song about a past relationship, Levitas has kept the door open to a future revival of it. In fact, he suggests it could even be better than before.

Even so, though, it’s not a promising prospect. To be a winner in a losing game is not really winning. Winning in a losing game may feel good – at least temporarily – but it’s still a net loss. Therefore, it’s a little strange that Levitas still wants to be with this other person. It seems more like he’s willing to partner again, mainly out of pity. He hears she’s been drinking alone, so he doesn’t want her to be lonely. What’s in it for him, though, other than doing the right thing?

This track’s arrangement features some tasty electric guitar fills. The chorus also includes some pop-y vocal hoo-hooing, on it, which is catchy. In addition to the strummed guitar part, there is also subtle organ underpinning the whole thing. The overall vibe is upbeat. So, even though it’s a relatively pessimistic view of a relationship, it doesn’t feel particularly pessimistic. Instead, Levitas can distance himself a bit from the relationship and act the part of an objective observer. Maybe this is because he still has some control over his emotions and his commitment to this relationship. This is especially clear when he sings about how this couple can “maybe” get back together. He sure doesn’t sound like a man under this other’s spell; instead, even though he’s in what looks to be like a losing game, he still holds all the cards.

The fact that Levitas compares this relationship to a game is another clue that he still has some control. When a person is smitten by another, he/she is not playing around. Not, it’s then that things get real serious, real quick.

Fine pop-rock, like this song, is always fun to discover. Those that like their pop a little rocking, or enjoy rock that’s also pop-y, will likely get a big kick out of this track. Lyrically, it’s light enough that it won’t break your heart, either. More serious music can be taxing on the listener. This song won’t tax you, though. It’s a breezy track that sounds good and feels relatively unconfrontational. Sometimes, you just need a song like this one. It’s bright, smart and fun. So, even while dealing with a losing situation, Levitas ends up winning.