Ian Bouras has been a fixture on the New York City music scene for almost two decades now and, despite medical problems, shows no signs of slowing down or allowing his creativity to be stifled in any respect. His latest release A Chipmunk’s Interpretation of Space is another instrumental release using guitar looping as the basis for its compositions and the live DVD filming of its six performances distinguishes it, if nothing else. There is fortunately much more going on, however. Bouras’s skill with his instrument allows him to accomplish many things within what might seem to be, from an outsider’s perspective, a relatively limited mode of creating. They couldn’t be more wrong. Bouras doesn’t rely on guitar looping alone. He brings other elements into play and the relationship between himself and the instrument is a more personal one than you see with most guitar players, even iconic ones. 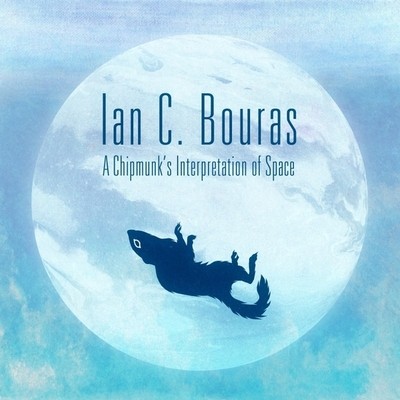 Part 1 is the longest performance, running eleven and a half minutes in length, but it never wears on the listener’s patience. Bouras has cool command of his instrument evident in each of these six parts and even more impressive if the compositions are improvisational rather than planned and rehearsed prior to filming, He seems to know exactly where he is going with each of these performance and incorporates melodic ideas alongside more diffuse motifs with such fluency that their complementary colors bleed into one another. Part 2 reinforces this assertion with the way it begins from a near ambient basis and transforms over time into a more melodic piece. He introduces secondary elements to his guitar playing in these two tracks that recur throughout – the most important his use of a glass slide and the chimes hanging from the headstock of his guitar. They add much but never in a hamfisted manner.

Part 4 finds him beginning the track with the glass slide but, once he establishes its presence in the loop, he dispenses with it for the remainder of the track. He manipulates his guitar via its toggle switch to shift the sound late in the performance. It is one of the more memorable performances in the second half of the release. Part 5, however, pulls out all of the stops. Bouras brings a full array of inventive ideas to bear by laying down a percussion track of a kind to open the fifth performance, palming the strings with one hand while smacking the fret board with the other, tapping the strings, and even scratching them to create new sounds in the tapestry of A Chipmunk’s Interpretation of Space. It will be, for many, the zenith of his work on this release.

Part 6 is the shortest performance and it isn’t a stretch to call it an echo, albeit different in important aspects, of the first track. He devotes much of his effort here towards more “straight forward” guitar playing, at least as straight forward as Bouras gets in the traditional sense of the term, and it has an appropriately elegiac air as he takes his figurative leave from the performance with eloquence and grace. It is a fitting end to A Chipmunk’s Interpretation of Space, one of the best releases in an instrumental vein you are likely to hear in 2019.