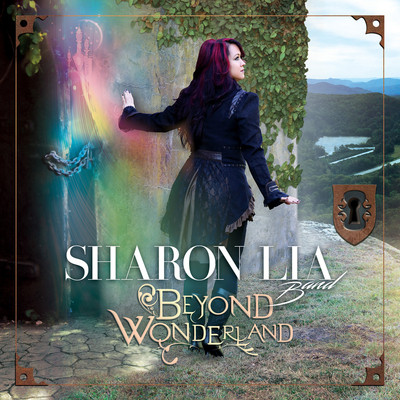 Hailing from the Philadelphia, Pennsylvania area, the Sharon Lia Band first coalesced in 2013 anchored by founding member Sharon Lia. The band has enjoyed a sharp uptick in the trajectory of their ascent through the music world in recent years landing a plum supporting slot for indie rock band Lydia, sharing the bill for Dover, Delaware’s Firefly Music Festival with The Killers, Eminem, and SZA, among others. They likewise performed at the 2018 edition of the Ladybug Music Festival and slated to appear again in 2019. Beyond Wonderland is the band’s first full length studio release and hearing the Sharon Lia Band fill an album with their unique songwriting sensibility proves worth the wait.

“Sick Addiction” is fraught with gravitas from the first. The central synthesizer riff has a hypnotic quality near claustrophobic. Lia’s vocal contributions to the song are wreathed in atmospherics but nevertheless connect with listeners. The first song makes it obvious for newcomers how the Sharon Lia Band traffics in serious minded material rather than aiming to entertain alone. Make no mistake, however, there’s a lot going in during this song and it explores a wide dramatic range from muted emotion into striding mid-tempo theatrics. Beyond Wonderland promises an ambitious sonic canvas and delivers with “Sick Addiction”.

“Anomie” has a wide screen anthemic sweep dwarfing even the most emphatic moments heard in the opener. The band sets the bar high for reproducing these songs on stage with even half the dramatic effect a studio setting achieves. This track is an impassioned crowd pleaser and demands full scale live treatment. The Sharon Lia Band are delivering their own personal vision of theatric rock The gripping extent of Lia’s vocal gifts build to even stronger crescendos during the track “Why Can’t We Pretend?”, but she’s well served by the intense vulnerability of their songwriting as well. The marriage of material and vocal emotional gravity never strikes a false note.

Howie Fallon’s drums framing the opening of “Free to Fall” set an authoritative tone for everything that follows. The arrangement escalates to an early climax with bass and guitar gathering to a peak before bursting into the song’s primary groove. Jannotti’s guitar has a clear and light funk edge throughout the track and blends well with the electronic contributions. It’s another rousing but tasteful Lia vocal. The classical inclinations running through much of Beyond Wonderland rightly culminate with the title track and album finale. Piano is one of the band’s possibly underrated tools in what makes the collection such a notable success and the near duet between its lyrical phrasing and Lia’s voice achieves more satisfying results than anywhere else on the release.

The Sharon Lia Band’s Beyond Wonderland is an audacious and imaginative jump into the future for this Philadelphia unit, but it is easy to get the sense the scope of their recordings and growing conceptual leanings will expand with further releases. Lia and her collaborators share a bold vision of what orchestral pop music can accomplish in 2019 many will appreciate.

The music of SHARON LIA BAND has been heard all over the world due to the promotional services offered by Danie Cortese Entertainment & Publicity – http://www.daniecorteseent.com/