Greg Smith calls his single “Waiting for the Truth.” It’s a folk-ish tune, built upon acoustic guitar and colored with harmonica. Smith sings over this instrumental bed with a gentle voice, which is not unlike Al Stewart’s in the 70s. 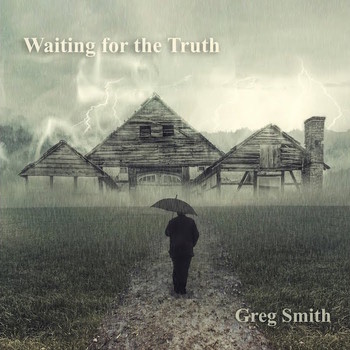 The song includes a few unusual lyrical lines within this largely philosophical song. For instance, Smith sings, “Patience never makes a sound,” at one point. Patience? Personified? This song also speaks a lot about the touring life. Smith most certainly knows about the road life, having recorded nine full albums to date.

The chorus finds Smith stating, “Spend our days rehearsing/Or waiting for the truth.” So, he’s either perfecting his musical craft, or somehow awaiting truth to find him in some way? That’s even more confusing. How, exactly, does one wait for the truth? Do you need to be in a specific physical locale? Do you also need to be in a particular state of mind? Must you be quiet, or can you be noisy? If you’re rehearsing, and you must be quiet, you’ll never hear the truth — even if it happens to speak to you.

These conundrum-esque lyrical lines are mixed with more straightforward descriptions. He sings, “Soft approaching sunrise, spreads across the day.” This reflects what it looks like out on the highway. Traveling America can be an eye-opening, exhilarating experience. Smith surely knows this. Then again, he sings, “Continental highway/Endlessly replayed.” In this instance, he’s pointing out how touring can also mean seeing repetitive images, which can be boring.

The second verse finds Smith singing, “Meet you in my dreams tonight.” So, suddenly, it changes from being a philosophical road song, to being something much more romantic. Either Smith is trying his best to keep us off his trail, or he’s hellbent on being all over the map with the lyric direction of this song. It, of course, could just be that Smith is imagining some girl – perhaps the girl of his dreams – while out there on the road. When you’re traveling from town to town, you have a lot of time to think. Then again, when you’re constantly traveling, and traveling can be tiring, this is oftentimes not your best thinking. Perhaps he sees something on his travels that reminds him of this special girl.

This single comes from Smiths album, also titled Waiting for the Truth. Clearly, seeking truth is a big part of Smiths artistic pursuit, as it should be with most artists. Many times, songwriters write songs in the hope that subconsciously, the truth will come out in their lyrics. Writing songs can sometimes seem like a mystical thing. Many songwriters will tell you they sincerely don’t know where their songs come from. Some say God, other say songs come from some unknown, unseen muse. However, no matter where they get their songs, most all songwriters are seeking to reveal truth in their songs. Sure, this quest may include big truths, like the meaning of life. However, songs can also reveal smaller, more personal truths. Truth, as the Bible says, can set you free, which is why waiting for the truth is always worth one’s time.